The night that the Will Mastin Trio opened for Janis Page at Ciro’s would become legendary in show business folklore – an event bested only by the night Sammy made his comeback at Ciro’s from a major car accident. Ciro’s on Sunset Boulevard was the classiest nightclub in Los Angeles, a regular haunt for Hollywood royalty, and a venue that Sammy had desperately wanted to play. His chance came in March 1951, and it was an opportunity that he grasped with both hands. He was 25.

An opening night to remember

With an opening-night audience full of Hollywood stars and bigwigs, Sammy shoehorned everything in his repertoire into the show – frenzied tap dancing, impressions of the song stylings of Billy Eckstine, Nat King Cole and Louis Armstrong and the vocal mannerisms of famous actors (some of whom – such as Humphery Bogart – were in the audience), and playing a variety of instruments. No-one had seen anything like it. The place went wild. Despite the Trio’s contract stipulating no more than 2 bows, the audience applause demanded an encore and after 8 curtain calls, the Trio finally retired to their dressing room.

Janis Page was furious, and quickly requested Ciro’s switch the order of performance – with her opening and the Trio closing the show – for the remainder of the run, which was extended from 2 to 8 weeks. The reviews were glowing and the Trio quickly became the hottest ticket in town, especially after another tour de force on Academy Awards night a few days later. The shows at Ciro’s saw a parade of Hollywood legends visit him backstage, and he formed fast friendships with Jerry Lewis, Tony Curtis, Janet Leigh, Jeff Chandler and more. In particular, Lewis and Davis, who were the same age, would form a lasting bond.

Sammy became a regular at Hollywood parties, and with Curtis, Chandler and Leigh would become a regular presence on movie lots, hanging out with movie stars of the day. Soon Sammy’s social set consisted of the likes of Bogart, Lauren Bacall, Milton Berle, Jack Benny, James Dean, Marilyn Monroe, and Elvis Presley. The William Morris agency began to represent the Trio, Arthur Silber, Sr. became their manager, Jess Rand their publicist, and Morty Stevens was brought on as a house conductor/arranger. 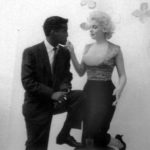 As the profile of the Trio – and Sammy in particular – grew, they found a new medium to embrace: television. A pair of successful appearances on Ed Sullivan’s CBS The Talk of the Town in late 1951 led to bookings on rival Eddie Cantor’s NBC The Colgate Comedy Hour throughout 1952. In 1953, ABC even shot a TV pilot at the cost of $20,000 of a potential 30-minute sitcom featuring Sammy, Sam and Will as a family of entertainers. The pilot found no sponsors willing to back a show with a black lead. Although the pilot was not picked up, this was a ground-breaking achievement for an African American entertainer.

In early 1954, with Will Mastin and Sam Sr. doing less and less in the act, the Trio headlined the famous Copacabana in New York, the premier nightclub in the nation, and Sammy signed a recording deal with Decca records. His very first single, “Hey There”, climbed to #1 on the Cash Box Record Charts on 25 September, and stayed there for 8 weeks.

More significantly, Davis appeared at the Last Frontier in Las Vegas in November with special contract conditions – the Trio were allowed to stay in the Frontier’s best suites (not in an African American hotel across town) and had free run of the facilities – the casino, restaurants, pool. This was most likely the first such deal, and a landmark achievement in breaking the colour barrier in Las Vegas.

1951 to 1954 had been a wild ride for Sammy. His trajectory had been straight up. However, on the morning of 19 November, he left The Last Frontier with his valet Charlie Head, driving to Hollywood to record the title song to the film Six Bridges to Cross. On the outskirts of San Bernardino on the Interstate, a Chrysler driven by a 72-year-old lady who had taken the wrong highway, backed up trying to cross the dirt median and take a different exit. Unable to pass the car on either side, Sammy’s Cadillac careened into the vehicle. In the smash, the driver of the Chysler received only minor injuries, but Charlie Head suffered a broken jaw and lost teeth, while Davis’s head had hit the steering wheel. This left him dazed and confused, with a broken nose, numerous cuts on his face, and his left eye dangling beside his cheek, having been impaled by the Cadillac insignia in the centre of the steering column. 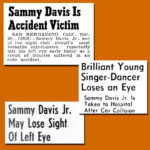 Davis was taken to Community Hospital, where his eye was operated on, and ultimately removed in a bid to save his remaining eye’s vision long term. The accident – one from which Davis was lucky to escape alive – was headline news around the country. Numerous well-wishers flocked to the hospital, and offers from nightclubs for up to triple the money the Trio had previously commanded poured in from around the country. Sammy spent 9 days in hospital, leaving to recuperate for several weeks in the Palm Springs home of Frank Sinatra.

The big fear was – would the loss of half his vision hobble Sammy’s expertise as a dancer? What impact would the physical and psychological consequences of his accident have on his abilities as a performer? While in hospital a rabbi doing the rounds had piqued his interest in Judaism and encouraged him to read A History of the Jews by Abram L. Sachar. Sammy subsequently studied material suggested to him by Rabbi Alvin Fine in San Fransisco, and sought advice from Rabbi Max Nussbaum in Los Angeles. A year later in 1956, he made the decision to convert to Judaism. While some friends and observers were somewhat suspicious of his motives, he claimed he had found a spiritual connection with the struggles of the Jewish people.

The Trio made the decision that Sammy’s comeback from his accident should take place where he first came to national prominence – Ciro’s. The date would be 11 January 1955, almost 8 weeks after his accident. Sammy spent the couple of weeks leading up to the date practising around the clock – alone – in a rented out studio, adjusting his sense of balance to his reduced depth perception. He wore an eye patch to cover his newly fitted false eye.

Frank Sinatra introduced the Trio onto the stage, and Sammy gave the performance of his life – starting with a 30-foot knee slide, then a tap routine, impressions of everyone in the audience, straight songs – his full range of talents on display. The audience response was pandemonium, and the press reviews glowing. Variety: “The lad who lost an eye came back … to receive one of the greatest ovations ever handed a performer, any place.” At the age of 29, ‘the lad’ was back on track.