The decade from 1956 to 1966 saw Sammy Davis, Jr. at the peak of his powers as an entertainer. He cemented himself a place in America’s consciousness with an omnipresence in entertainment: Sammy was in nightclubs, he was a guest on seemingly every TV show possible, he was on record (releasing 37 LP albums over this period), he was in the cinema, he was on the bookshelves. Unlike his nightclub entertainer contemporaries, for Sammy there was also additional territory to conquer – that of musical theatre, and he opened and closed the decade with successful runs in Broadway musicals. Through this period his loyalty to the Trio remained intact, until the retirements of Will Mastin and Sam Sr. freed him to pursue a solo career. 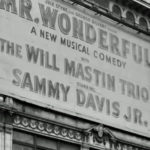 In 1955, Sammy was repeatedly approached by songwriter Jule Styne to consider Broadway. The major stumbling blocks were Sammy’s indebtedness to Chicago mobsters – who were increasingly funding his profligate lifestyle by advancing his salary ahead of his nightclub dates – and resistance from his Trio partners to take a break from touring and enter an unknown world of musicals. Solutions were found when Davis was given a one-year-only reprieve by Chicago and it was agreed that Will and Sam Sr. would have roles written into the show. Work could then begin to create a vehicle appropriate for Davis.

The plot of Mr. Wonderful revolved around Davis as Charlie Welch, an entertainer fighting self-doubt. Sammy’s usual nightclub act formed a large part of the second act of the show. Jack Carter, Pat Marshall, Olga James and Chita Rivera were cast in additional roles, and the show featured an integrated chorus line. Opening in March 1956, the show ran for 383 performances until February 1957, despite a particularly weak plot and almost universal distain from theatre critics. Sammy carried the show and was a one-man publicity machine around New York, driving attendance and ensuring the show’s success.

Sammy turns to TV and the silver screen

A chapter in Sammy’s career closed when Sam Sr. and Will Mastin retired from the Trio in mid-1957 and late-1958 respectively. But another chapter opened – dramatic acting. In addition to continuing to tour the country’s night spots, over the next 3 years he would tape dramatic roles in two television anthology series, General Electric Theatre and Zane Grey Theatre, play the role of escaped convict Glenn Griffin in a stage play production of The Desperate Hours and star in two feature films. 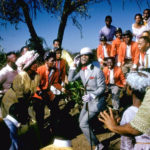 Sammy in “Porgy and Bess”

In 1958’s Anna Lucasta, he starred alongside Eartha Kitt in an all-black film adaptation of a Broadway musical about a prostitute (Kitt) and her on-and-off boyfriend, Danny (Davis), a sailor. It was a Hollywood-backed, serious, dramatic black film which was almost unheard of at the time, and its distributor gave it little promotion and only a limited release.

Sammy’s other role in 1958 was in producer Samuel Goldwyn’s big-budget production of George Gershwin’s Porgy and Bess, and it was the silver screen role Davis was born to play – Sportin’ Life. Sammy starred alongside Sidney Poitier, Dorothy Dandridge, Pearl Bailey, Diahann Carroll and Brock Peters. The film was plagued with problems, such as the film’s sets being destroyed by fire and director Otto Preminger fighting with Goldwyn over major aspects of the production.

Davis received praise for his performance from most critics, and Goldwyn felt that a Best Supporting Actor Oscar nomination was a possibility. However, Sammy’s agents had insisted on top billing which meant he was ineligible, and this could not be changed after the film’s release.

Reprise and the ‘Rat Pack’

Sammy continued to tour, including his first visit to England for performances at the Club Pigalle and a Royal Command Performance at the Victoria Palace Theatre for Queen Elizabeth II, on a bill with Nat King Cole and Liberace among others. ABC broadcast a one-hour special called Sammy Davis, Jr. Meets the British with footage from Davis’s act at the Pigalle.

In London, he befriended songwriters Anthony Newley and Leslie Bricusse, whose works Davis would regularly perform on stage and on record for the rest of his career. Sammy would return to the UK periodically over the next few years, including for a record-breaking run at the London Palladium in 1963, and to tape two television specials for the BBC called Meet Sammy Davis, Jr.

On record, Davis’s output at Decca had yielded 15 albums, with some artistic and some commercial successes – including Sammy’s first LP, Starring Sammy Davis, Jr. which rose to #1 after it was released in April 1955. He had several other singles chart in the Billboard Top 100. In 1960, Sammy made the decision to move from Decca to Frank Sinatra’s brand new label, Reprise.

Sammy Davis, Jr. was now a heavyweight in Frank Sinatra’s circle of close friends – an ensemble which included Dean Martin, Peter Lawford and Joey Bishop, a group later christened ‘The Rat Pack’. Sinatra was Sammy’s Best Man when Sammy married May Britt in 1960. 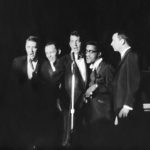 The ‘Rat Pack’ at The Sands

Heading into 1961, all five starred in a very successful vanity project, Ocean’s 11, which started filming in Las Vegas in January 1961. The group performed concurrently at the Sands Hotel each night. This began a period of ‘Rat Pack’ activities for Davis that included shooting the films Sergeants 3 in June 1961 and Robin and the 7 Hoods in November 1963.

In addition, there were performances with Sinatra and Martin in Atlantic City and the Villa Venice in Chicago in 1962, and back at The Sands Hotel in both January and September 1963. By 1964, ‘Rat Pack’ activities had largely ceased, and preparations were being made for Sammy’s return to Broadway.

Golden Boy – and much more

In October 1964, his new musical Golden Boy opened on Broadway. It was based on Clifford Odets’ 1937 play of the same name, but had suffered a tortuous path through 1964 to get to Broadway – undergoing numerous re-writes, surviving the death of Odets himself, having the original director Peter Coe sacked and replaced by Arthur Penn, and overcoming Davis’s periodic bouts of laryngitis. 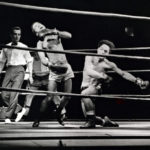 The musical dealt with the struggles of boxer Joe Wellington (Davis) and involved a romance with a white woman (Paula Wayne) – a plot which caused controversy, and led to bomb threats. Regardless, Golden Boy succeeded due to Davis’s star power and ran for 568 performances until March 1966. Sammy’s performance was nominated for a Tony Award for Best Actor in 1965.

Not content with 8 shows a week on Broadway, during this period Sammy also found time to continue recording for Reprise, co-author a bestselling autobiography titled Yes I Can with Burt and Jane Boyar (published in September 1965), and produce and star in a feature film titled A Man Called Adam. This began filming in November 1965 and also starred Cicely Tyson, Louis Armstrong, Frank Sinatra, Jr. and Peter Lawford.

He also hosted his own hour-long weekly prime-time network variety show, the first African American to do so. The Sammy Davis, Jr. Show aired on NBC from 7 January to 22 April 1966. It was cancelled just as it was finding its feet and the final episode was a solo tour de force that left viewers wondering what might have been.