The ‘Rat Pack’ legend was forged in February 1960 during the filming of Ocean’s 11 in Las Vegas. After filming during the day, Frank Sinatra, Sammy Davis, Jr., Dean Martin, Peter Lawford and Joey Bishop performed a nightclub act at the Sands Hotel each evening in an extravaganza they referred to as ‘The Summit’. Click here for more about Sammy and the ‘Rat Pack’.

While various members of the circle would occasionally team up for movies in subsequent years, it was Sinatra, Martin and Davis’s regular performances on stage together through the early 1960s that would cement these three in showbiz consciousness. See below for notable releases of ‘Rat Pack’ material. 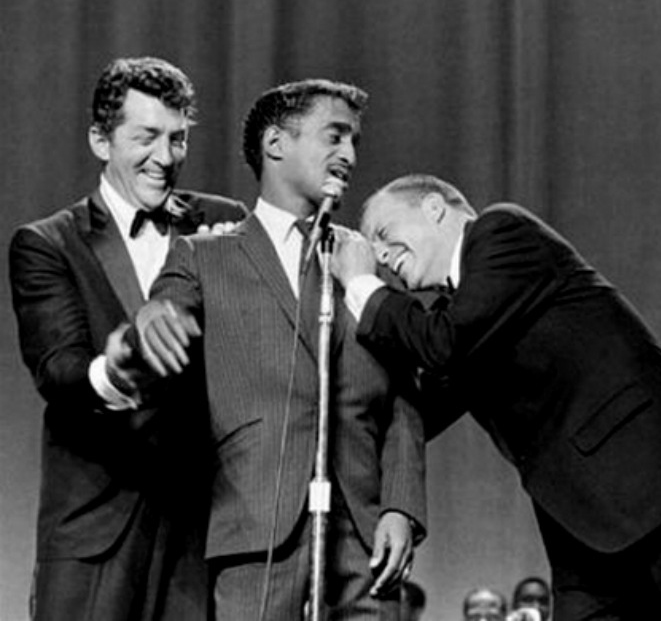 Recording made at the 500 Club in Atlantic City, New Jersey. Only made available as a souvenir from the Sinatrama Room at the Latimer Café in Philadelphia.

Two duets were recorded in-studio for release on a Reprise 45rpm single, one between Frank and Sammy, and one between Dean and Sammy. These two songs became part of the trio’s live repertoire. The single peaked at #46 on the Billboard Hot 100.

Recording made at the Villa Venice nightclub in Chicago, Illinois. Reprise Records recorded material from around 15 shows across 7 days, but never released an LP from the material. There have been several releases, most mixing content from different nights.

Back where it all started, at the Copa Room of The Sands Hotel in Las Vegas, Nevada. Reprise Records again recorded material which wasn’t released. Bootleg copies of different nights’ material exist.

Held at the Kiel Opera House in St. Louis, Missouri, this was a live benefit telecast to support Dismas House of St. Louis, a halfway house for ex-convicts. The footage, thought to be lost, was uncovered in 1997 and officially released in 2003. Emceed by Johnny Carson.

Frank, Dean and Sammy did six shows together as part of their ‘Together Again’ tour, at which point Dean dropped out. Frank and Sammy continued as a pair for a further 12 shows. This recording is from the Metro Center Arena in Bloomington, Minnesota.

There are a million ‘Rat Pack’ compilation albums in existence. Most are poor quality and utilise easily licensable material rather than try to present an accurate picture of Sinatra, Martin and Davis’s recordings of the time. The following are official releases and hence contain music actually recorded around the time the trio were regularly collaborating with each other.