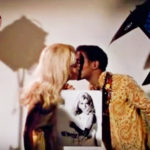 First interracial kiss on US TV

After the Sammy Davis, Jr. Show was cancelled, Sammy Davis, Jr. hit the road with a vengeance. Thanks to the Broadway run of Golden Boy, he had been away from regular nightclub gigs for around two years – and his first stop was The Copa Room at The Sands Hotel in Las Vegas. Reprise Records recorded three albums during this run, all amongst Sammy’s best. Two were live recordings: That’s All was a 2LP set featuring Davis’s regular act, and The Sounds Of ’66 was recorded when Sammy, joined by Buddy Rich, put on an early morning show for performers on the Strip. The third was a studio recording in Las Vegas with sole accompaniment of bossa nova guitarist Laurindo Almeida.

Back in LA over the next year, he made several guest appearances on TV shows including a cameo during a Bat-climb on Batman, and an appearance on Movin’ With Nancy, a special featuring Frank Sinatra’s daughter Nancy Sinatra, during which Sammy and Nancy exchanged a brief kiss on the cheek. When broadcast in December 1967, it became the first interracial kiss in television history (it was left to William Shatner and Sammy’s friend Nichelle Nichols to step up the following year with a scripted kiss – on the lips – on Star Trek).

Throughout the late 1960s, Sammy’s home-away-from-home would become London – he spent several months there in each of 1967, 1968 and 1969. In 1967, he was shooting a comedy / adventure film called Salt and Pepper alongside his friend Peter Lawford, in which the two played London nightclub owners. Sammy, 42, and Peter, 44, were swept up in the cultural phenomenon known as ‘swinging London’: a revolution in art, music and fashion, the emergence of ‘mod’ subculture, and major changes in social and sexual politics. Sammy was captivated and his immersion in a new lifestyle of drugs and sexual liberation would change the trajectory of his life and career. 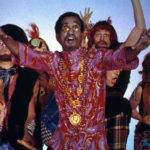 Some of the consequences were soon apparent back in the USA. In November 1967 Sammy’s wife, May Britt, indicated her intention to start divorce proceedings. The overhaul of Sammy’s persona was reinforced by an appearance as the psychedelic love guru / phoney evangelist Big Daddy in the movie adaptation of Sweet Charity, starring Shirley MacLaine. Sammy was the centre of a memorable Bob Fosse production number “The Rhythm of Life”, although the film itself disappointed at the box office.

Part of the deal to halt the run of Golden Boy on Broadway in 1966 was an agreement with producer Hilly Elkins to stage a London production. The book was largely re-written, songs added and removed and the story changed to reflect a civil rights reality in America which had changed significantly in only 4 years. After a month of tryouts in Chicago, the new Golden Boy opened at the London Palladium on 4 June 1968. It was the first ever book musical to run at the famed venue and all tickets for the entire run were sold out in advance. Demand was such that the show was extended from closing 27 July to 14 September. 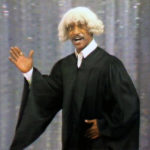 Sammy’s impact on pop culture was highlighted when his March 1968 appearance as a jive-talking judge on comedy sketch program Rowan & Martin’s Laugh In gave America the catch phrase ‘Here comes the judge’ – a phrase lifted from a comedy routine by Pigmeat Markham in the 1940s. By June 1968, there were 4 songs on the Billboard 100 incorporating the phrase. Sammy also had his own Billboard success, releasing the song “I’ve Gotta Be Me” in December 1968 and seeing it rise to #11 overall, and to #1 on the Billboard Adult Contemporary chart (then called ‘Easy Listening’). It remained a signature song for the rest of his career.

Sammy was back in London the following year shooting a sequel to Salt and Pepper, called One More Time, directed by Jerry Lewis. While in London for each project, Davis partied like a rock star – and usually with rock stars like Mama Cass Elliot and Jimi Hendrix – all fuelled by booze, marijuana, speed and LSD. Davis imported this way of life back to the US, and soon his LA house was a regular party venue with plenty of whiskey, cocaine and amyl nitrite to go around. It was to this world that he introduced his new wife, Altovise Gore, when they married in 1970.

“I’ve Gotta Be Me” aside, Sammy’s recording career at Reprise records appeared to be on the wane. His two subsequent albums, each containing some R&B material, tanked. Sammy signed with Motown Records in 1970 in a blaze of publicity, but the first album was a failure and Sammy quietly left for MGM. There he partnered with producer Mike Curb, whose inspired first decision was to partner Sammy with his musical group, The Mike Curb Congregation on “The Candy Man”, a tune from the movie Willy Wonka & The Chocolate Factory. Released in March 1972, it reached #1 on the Billboard Top 100 in June, becoming Davis’s only #1 and certified Gold record. 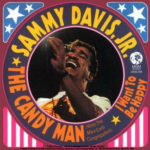 It was a ray of sunshine in a sea of financial stress. Despite his huge earning power, Sammy was perpetually broke – thanks to his endlessly profligate lifestyle. The early 70s were a period of professional and personal calamities for Sammy. He bought out the elderly ‘Cocoanut Grove’ nightclub at the Ambassador Hotel in LA, launching it as the ‘Now Grove’ in the style of a Las Vegas lounge in early 1970. By mid-1971 it was reportedly seven figures in debt.

In 1973, he was given the role of de-facto host for a new variety series called NBC Follies. Sammy was in every episode, but the show found ratings difficulty and was cancelled after 13 episodes. Also in 1973, Sammy hosted a telethon for the Highway Safety Foundation. Given Sammy’s own car accident in 1954, it was a cause close to his heart – but it was a total disaster. Unfulfilled viewer pledges left the Foundation unable to cover the telethon’s costs, and it suffered a loss so great the Foundation closed. 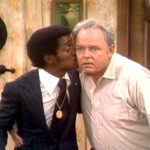 Even Sammy’s successes were swiftly undercut. In February 1972 he made a guest appearance as himself on the hit new show All In The Family, with Carroll O’Connor starring as the ‘loveable bigot’ Archie Bunker. The episode was ranked #13 on TV Guide’s ‘100 Greatest Episodes of All Time’. After the famous episode-ending scene in which Sammy kisses Archie, the ensuing laughter went on for so long that it had to be severely edited for network broadcast, and it is widely regarded as one of the longest laughs in TV history.

However, Sammy’s embrace of another controversial figure during 1972 would leave him humiliated and ostracised. Davis had taken up a seat on the National Advisory Council on Economic Opportunity in 1971, and at President Nixon’s request he made a trip to Vietnam in early 1972 to entertain the troops and report back regarding the drug problem which was disproportionally afflicting African American troops. Sammy received stinging criticism from those who felt the Nixon Administration was hostile to the interests of the black community, but the criticism intensified when Davis was photographed at a rally hugging the President. 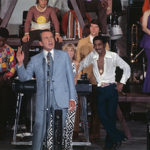 Nixon had been awarding Davis his certified Gold record Award for “The Candy Man”, and had said “You can’t buy Sammy Davis, Jr. by inviting him to the White House. You can only buy Sammy by doing good things for America”, but the context turned out to be irrelevant: Sammy Davis, Jr. had endorsed Richard Nixon and as such had shocked his white liberal friends, incurred the hatred of white racists and was derided as a sell-out by the black community. The fact that his Vietnam report had been seriously acted upon was a fact lost in the P.R. war.

It is not surprising then that the mid-1970s saw Davis’s heaviest period of alcohol addiction and drug abuse and included his much-reported obsession with swinging, pornography and even a brief dalliance with satanism. He became an increasingly demanding, unreliable and unstable performer on stage, being frequently drunk or stoned and susceptible to tantrums and mood swings. In 1974, he accepted an invitation from Princess Grace of Monaco to open a new Monte Carlo casino, but famously refused to perform in a fit of pique, and sailed off on the royal family’s yacht!

Sensing his performances were flagging, Sammy tried to compensate: “I tried to come alive with the clothes, the jumpsuits, the leather pants, diamond rings on every finger … Desperation was my producer. As always, I escaped into debauchery and alcohol to forget the magic was waning.” When Sammy was roasted on the Dean Martin Celebrity Roast in 1975, Martin quipped “Sammy almost did a command performance for Prince Ranier of Monaco. But he didn’t perform that night, because he was a little steamed at Princess Grace … she was wearing more jewellery than he was!” 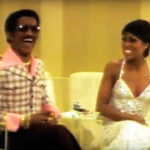 In 1975, Davis debuted as host of Sammy & Company, a talk show with some variety elements. The show was syndicated, leaving it less up to the whims of a network to cancel, and ran for 3 seasons. The show’s format allowed it to be shot around his other bookings, at various locations like Las Vegas, Lake Tahoe and even Acapulco. Despite successfully stepping in for Johnny Carson and Mike Douglas numerous times over the years, Sammy generally exhibited his worst tendencies as host: being overly obsequious to his guests and laughing uncontrollably at the mildest of jokes. It provided fodder for Billy Crystal’s killer – if loving – 1980s impression of him, which stuck in the public consciousness.

Sammy had more individual talents than almost anyone in entertainment history, but being a talk show host while going through life in a drug-fuelled haze wasn’t one of them. Despite the nature of his hosting, the roster of guests was impressive, including one episode devoted to jazz which featured Count Basie, Dizzy Gillespie, Sarah Vaughan and Billy Eckstine. Sammy & Company kept Sammy busy through 1976 and 1977, alongside his live engagements and some guest appearances on TV. However, personally and professionally the mid-70s saw him reach a nadir: “I had drugs, booze and broads, and I had nothing”.

It would take the intervention of an old friend to rescue him.