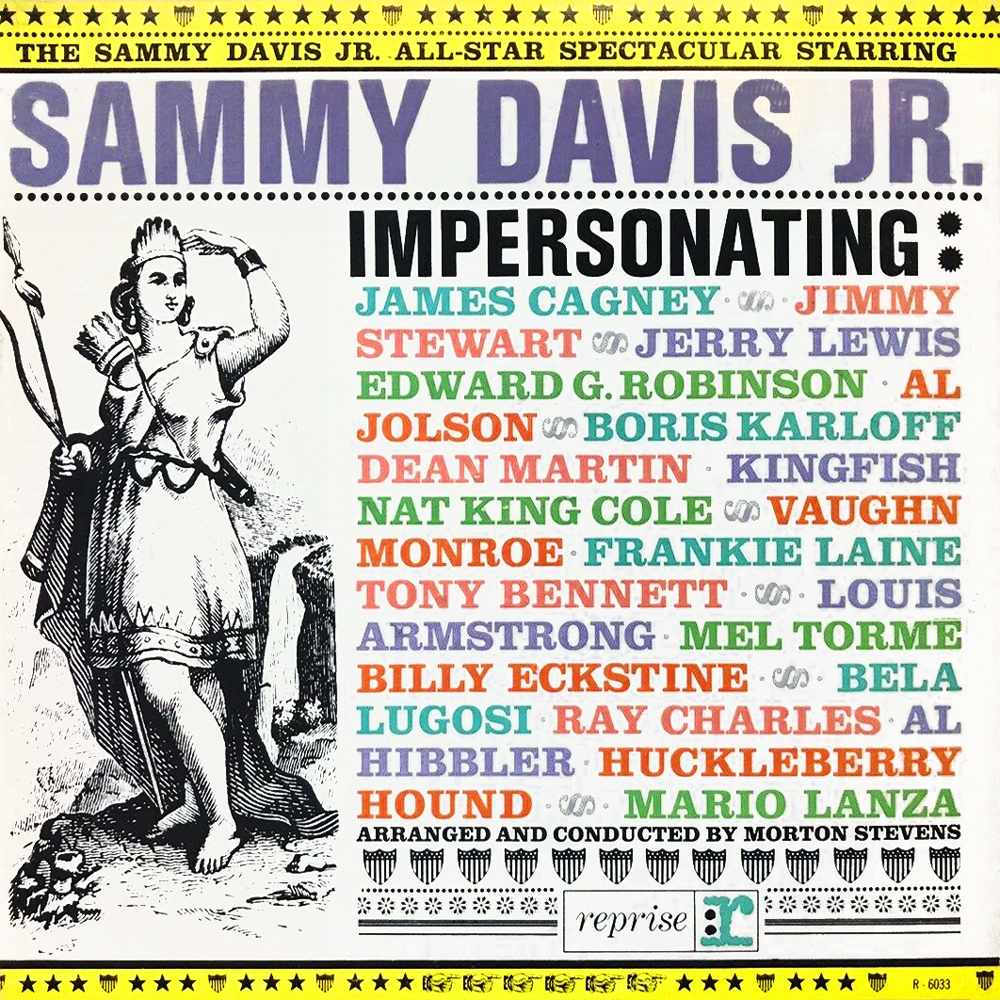 It’s been argued that in order to truly appreciate the genius of Sammy Davis, Jr. you had to see him perform live – that is, in an environment in which the whole was greater than the sum of the parts. One of those individual parts was Sammy’s talent for impressions, a staple of his live act; yet another thing he could do to delight his audience when he was finished singing, or tapping, or playing instruments, or telling jokes. With The Sammy Davis, Jr. All-Star Spectacular, Reprise wanted to capture this lightning in a bottle.

Sammy was no professional impressionist like Rich Little or Frank Gorshin, but cultivating the skill was important to him; after all, it had been a much younger Sammy’s groundbreaking impressions of white celebrities, done in front of white audiences, during his days with the Will Mastin Trio that had really set the Trio apart from other vaudeville acts. Furthermore, due to his own vocal prowess, Sammy could actually do impressions of singers – this had been how he got into singing in the first place. (In several of his first few sides recorded for Capitol in 1949, he sounds so much like Billy Eckstine you can tell he’s been doing impressions to the point where he can’t find his own ‘voice’.)

Sammy had largely shied away from impressions and other novelty material on LP at Decca (a notable exception being “Because of You” on Starring Sammy Davis, Jr.), but the idea of singing songs as the people who popularised them and then using that as a launching pad for his favourite impressions must have appealed to him. The album’s A-side makes for more interesting than purely enjoyable listening today, given that a few of Sammy’s subjects have since faded somewhat from modern popular culture’s memory. The list of impressions are as follows:

• “Be My Love” – Mario Lanza and Louis Armstrong (concluding as himself).

• “Lulu’s Back In Town” – Mel Tormé and Jerry Lewis (concluding as himself).

The album’s B-side is something of a hidden gem in Sammy’s Reprise catalogue: six of the swinging-est sides he ever laid on vinyl. Arranger Morty Stevens (who also arranged the A-side) has Sammy explode out of the blocks with “I Married An Angel”, and things don’t get any less uptempo from there! You can catch your breath briefly on “If You Are But A Dream”, which is given a mambo-esque flavour by long-time Count Basie arranger Neal Hefti.

Falling In Love Again: From the 1930 German movie Der blaue Engel, the original is titled “Ich bin von Kopf bis Fuß auf Liebe eingestellt”. While the song is most famously associated with Marlene Dietrich, it was Sammy’s wife-to-be May Britt who sang it in the 1959 American remake The Blue Angel (the film in which she caught Sammy’s eye). Britt’s version was also released on 45. Here, Sammy sings the first half with just bass and cymbals before putting the foot on the accelerator. This is also the first recording to appear on LP arranged by Sammy’s pianist George Rhodes, who had recently replaced Morty Stevens as Sammy’s musical director on the road.

I Married An Angel: Have. You. Heard!? Sammy takes the Rodgers and Hart classic, more often sung as a ballad, and places it squarely into hyperdrive! 1930s Broadway meets space-age cool. Was Sammy sending a message to his then-wife May Britt? Possibly, given that it was recorded in the same session as “Falling In Love Again” and placed immediately before it on the album…

Lulu’s Back In Town: Sammy tackles the rarely attempted ‘Mel Tormé impression’. While the timbre of Sammy’s voice is nothing like Mel’s, Sammy nails some of Mel’s stylistic flourishes – such as on “Mr Otis regrets”. Sammy’s bang-on Jerry Lewis impression then follows (slightly over-the-top if such a thing is even possible when doing Jerry Lewis?) before closing the song in his own voice.

You Can’t Love ’Em All: This piece celebrating swingin’ bachelor-pad stereotypes was from the 1959 Bing Crosby/Debbie Reynolds film Say One For Me, which was so bad it was long considered to be one of the worst films of all time. Written by the Rat Pack’s favourite writing team, Sammy Cahn and Jimmy van Heusen, the song had been recorded by Dean Martin for Capitol when the film came out. Sammy gives us his take on this paean to the pitfalls of non-monogamy, starting with “Now, all you cats that have them playboy-type pads, take this advice from me…”