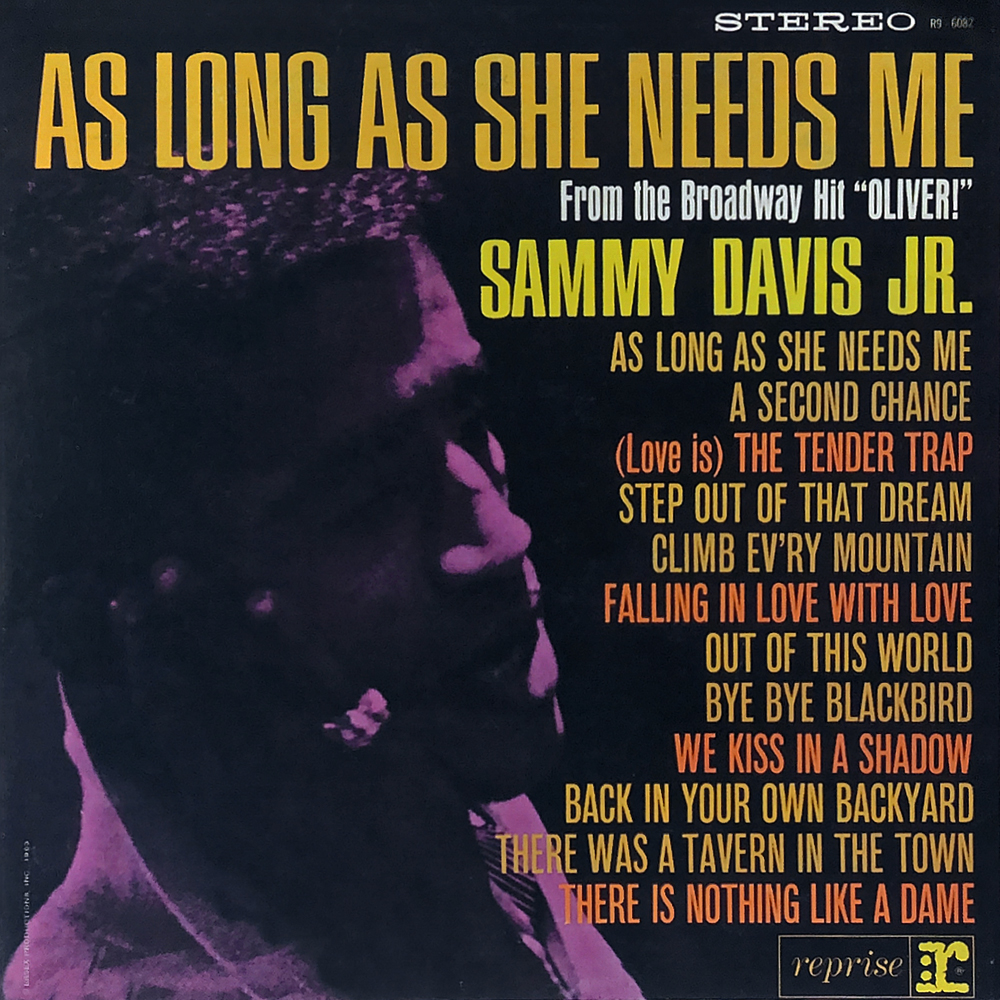 In mid-1962, Reprise Records had taken a Sammy Davis, Jr. recording of a show-stopping number from an English musical which was about to open on Broadway, and released it as a single. The single (arranged by Marty Paich) made the Billboard charts, peaking at #17. At the same time, they took the recording and named a whole album after it, adding a couple of new cuts but filling it mostly with material that had already been released on previous Sammy Davis, Jr. albums. The album also charted, peaking at #14. That single and that album was What Kind Of Fool Am I.

Reprise clearly believed that lighting could strike twice! In late 1962, Sammy Davis, Jr. recorded “As Long As She Needs Me”, a show-stopping number from the West End hit musical Oliver!, which was due to open on Broadway in January 1963. The single (arranged by Marty Paich) was dutifully released in January and spent 9 weeks on the Billboard Top 100 (peaking at #19 on the Billboard Adult Contemporary chart).

So, Reprise did the only logical thing: they took the recording and named a whole album after it, adding a couple of new cuts but filling it mostly with material that had already been released on previous Sammy Davis, Jr. albums. By March, they had As Long As She Needs Me ready to go – with no liner notes and only simple cover art – and hit the stores. The strategy met with success again: the LP spent 15 weeks on the Billboard Top LPs chart, peaking at #73. Not quite the smash hit as its predecessor was, but nothing to sneeze at.

In addition to the title tune, the album featured three Sammy cuts new to LP: “There Was A Tavern In The Town” (which had been on Sammy’s second Reprise single release back in 1961 and was arranged by Count Basie’s long time collaborator Neal Hefti), “Step Out Of That Dream”, and “A Second Chance” (also known as “Song From ‘Two For The Seesaw’”).

To fill out the remainder of the LP, Reprise included four titles which had appeared on The Wham Of Sam, and another four titles that had appeared on Sammy Davis, Jr. Belts The Best Of Broadway. Given that these are two of Sammy’s greatest albums, one can appreciate there is therefore plenty of top draw material in this LP release as well, although the overall song selection doesn’t gel as well as on the albums the recordings originated from.

As Long As She Needs Me: Another superior pop ballad from Davis and Paich. In Oliver!, the song was originally “As Long As He Needs Me” and is sung by the character Nancy. Shirley Bassey had the hit version in the UK when the musical was playing in the West End, but Sammy’s is the version that hit pay dirt in the US.

There Was A Tavern In The Town: A rip-rollicking high-tempo barn-burner! Composer Fran Smith and lyricist Sol Parker provide a fresh, tongue-in-cheek twist on the traditional English folk song (in which the singer pines for a woman who’s off with another man). In this version, the tavern burns to the ground killing everyone, including his love, Honey Brown, and leaving the singer vowing revenge.

Song From “Two For The See-Saw”: The movie was a romantic drama starring Shirley MacLaine and Robert Mitchum, and its title tune was nominated for a 1962 Academy Award for Best Original Song. Originally released on the B-side of “As Long As She Needs Me”, Paich produces a nice soundscape of strings, bongos, and saxes.

Step Out Of That Dream: Recorded in June 1961, this was overlooked for inclusion on a bunch of Sammy LPs. The song hails from the little-known 1957 film Eighteen And Anxious, in which a naive teenager gets pregnant and is forced to face the realities of life. It’s given a quasi-Latin beat here, but Sammy never really seems quite into it.