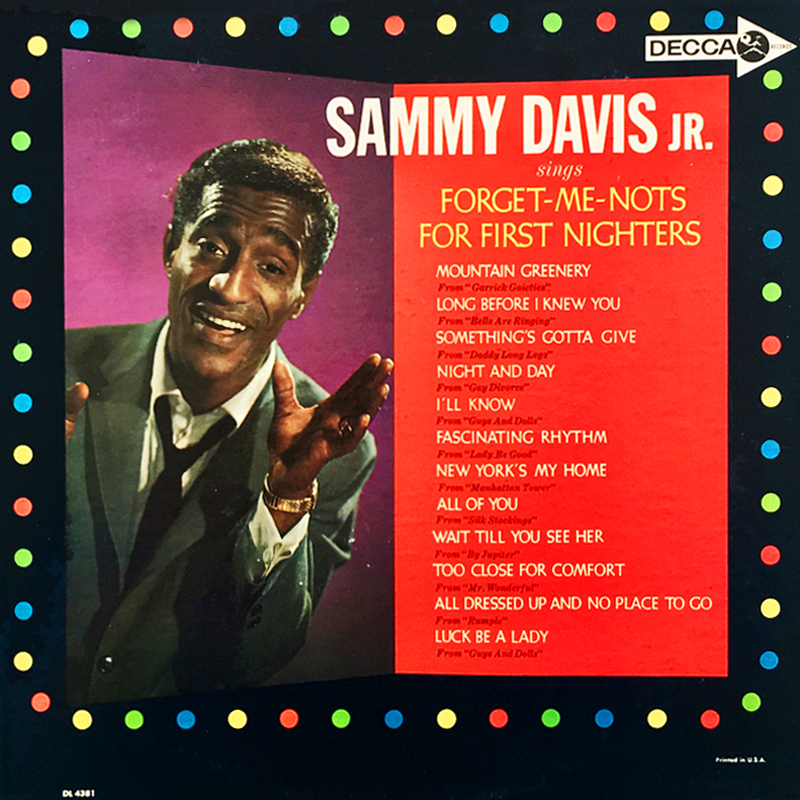 In 1963, when Decca Records released Forget-Me-Nots for First Nighters, Sammy Davis, Jr. was one of the most recognisable faces in American popular culture. Although Sammy had left Decca at the end of 1960 and had already released six LPs at Reprise Records, no doubt there was still commercial value for Decca in releasing another Sammy Davis, Jr. album.

This LP isn’t exactly a compilation album, as three recordings were being released for the first time. It is more accurate to describe it as a potpourri of lesser-known Davis recordings spanning 1954 to 1958, almost all emanating from Broadway scores – hence the collection’s title. Despite the grab-bag nature of the album, there are some gems in amongst the collection.

Two titles had appeared previously on LP: “Too Close For Comfort” on Mr. Wonderful, and “Night and Day” on All The Way … And Then Some!

Two recordings (“Luck Be A Lady” and “I’ll Know”) had appeared on the A side of an extended play 45 from 1955 titled Guys and Dolls. Recorded in order to capitalise on the launch of the motion picture in November 1955, this EP featured Sammy singing four numbers from the film, all arranged by Jack Pleis.

Three titles had never been previously released in any form: “Wait Till You See Her”, “Mountain Greenery” and “Fascinating Rhythm”.

The remaining five cuts had all been released as singles throughout Sammy’s tenure at Decca, with varying degrees of success. “Something’s Gotta Give” was the second-most successful single of Sammy’s career, reaching #9 on the Billboard Top 100. “New York’s My Home” charted at #59, while “All Of You” charted at #37 on the CashBox charts in the US and hit #24 in the UK. “All Dressed Up And No Place To Go” and “Long Before I Knew You” were each released in 1957, but didn’t chart.

The LP’s liner notes, by Joel Cohen, provide a summary of the listening experience: “Here’s an album with something special for everybody – a bountiful bouquet of forget-me-nots. So, turn down the lights – nostalgia sheds its own warm glow. Settle back … put away your programs. Curtain going up … master showman Sammy Davis, Jr. is centerstage … and you have two-on-the-aisle for many a happy evening of music and memory.”

New York’s My Home: From Gordon Jenkins’ innovative Manhattan Tower suite, which combined mood music, original songs, spoken narration/dialogue, and sound effects to tell a story all on vinyl. Jenkins released an expanded version in 1956, which Sammy must have appreciated in order to immediately record one of the best numbers himself. He gives a rousing rendition of the tune, supported by a chorus. One of the best ‘New York’ songs around, although I believe the city only has two baseball team left…

Luck Be A Lady: This became, of course, a signature tune for Frank Sinatra, but this Sammy recording pre-dates all of that. After all, while Frank was in 1955’s Guys and Dolls, it was Marlon Brando, as Sky Masterson, who sang the number in the film. It is great hearing a song so associated with the ‘Rat Pack’ oeuvre sung so delightfully by Sammy half a decade before ‘Rat Pack’ activities really got started.

Fascinating Rhythm: You can tell this recording had a difficult birth: in the Decca master listings it seems Sammy and arranger Morty Stevens had tried previously to make “Fascinating Rhythm” work. Neither a version recorded in February 1957, nor this one from May 1957 were deemed good enough to release until the latter was dragged out of the vaults for this LP. It’s a lot of fun, though – it has got a clever start, is not so much uptempo as it is in hyperdrive, features an ad-libbed passage in the middle, and has a crazy “That’s all folks” Looney Tunes finish that no doubt kept it off previous Davis LPs.

Wait Till You See Her: This curiosity – from the Broadway show By Jupiter – was recorded at the same time as Sammy’s Just For Lovers in mid-1955. It is typical early Sammy and was probably wisely left off the album; despite a lovely Richard Rodgers melody (which Morty Stevens arranges into a waltz), there are so many frills, surges, and endless bending of notes that it undercuts any depth to the song. The better ballad on this album is “Long Before I Knew You”.