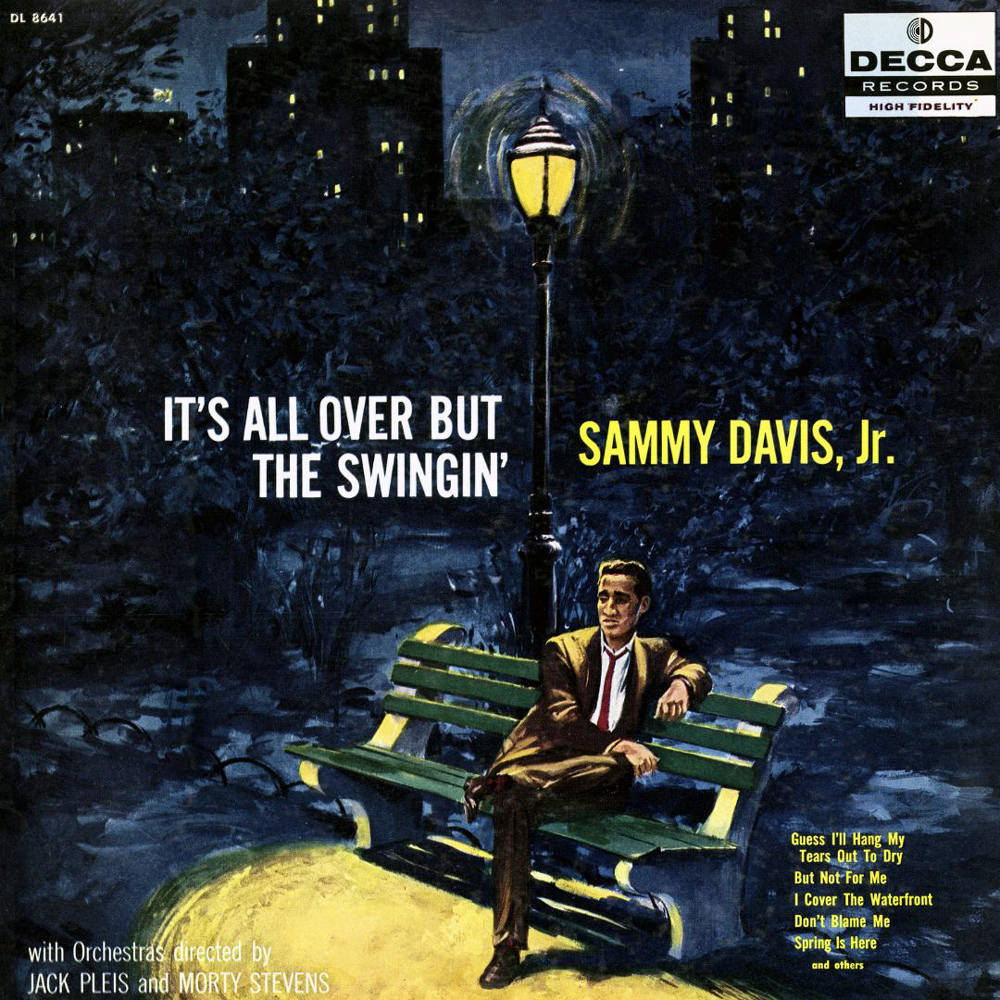 At first glance, Sammy Davis, Jr.’s It’s All Over But The Swingin’ might appear as nothing more than a warmed-over Frank Sinatra torch-song concept album wannabe from The Chairman’s greatest acolyte. After all, Sinatra’s lamp-post from In The Wee Small Hours and Songs For Young Lovers is right there on the cover, the album was recorded just two months after Frank put the finishing touches on an album of despairing ballads himself (Where Are You?), the orchestra personnel consisted of many of Frank’s regular studio musicians, and Sinatra’s name appears no fewer than four times in the LP’s liner notes.

But appearances can be deceiving. Instead, this brilliant album – with 12 sides exploring the losing part of ‘loving and losing’ – is top-drawer Sammy Davis, Jr., has top-rate arrangements from Morty Stevens and Jack Pleis, and utilises top-notch jazz musicians like Nelson Riddle regulars Harry ‘Sweets’ Edison (trumpet), Harry Klee (flute), Joe Comfort (bass) and Alvin Stoller (drums). The song selection is particularly strong, featuring the best of The Great American Songbook – without being derivative of Sammy’s idol (most of the songs Sinatra had not recorded, and five of them Sinatra never recorded).

Unlike Where Are You?, which melded Sinatra’s regret with Gordon Jenkins’ lush string orchestra, It’s All Over But The Swingin’ matches Sammy’s melancholy with a real jazz attitude. It features some outstanding solos, keeps the few strings largely in the background, and plays with tempo changes throughout. The most authoritative writer on jazz drumming, Burt Korall, highlights this variety in the LP’s original liner notes, saying “the interpretations herein vary as to tempo, degree of intensity and colour”.

Across the album, Sammy regularly sings while accompanied only by the guitar of Bob Bain or Tony Rizzi – a musical device to which Sammy was clearly partial, and which would anticipate Davis’s next Decca album.

Uninspired facsimile this is not. In fact, it is one of Sammy Davis, Jr.’s greatest albums, and it has been said that Sammy himself considered it one of his favourites.

It Never Entered My Mind: Sure, every jazz vocalist has covered it, but this is a lovely arrangement from Jack Pleis, with a flute-heavy intro and conclusion, and a nice solo by Irving ‘Babe’ Russin (tenor sax). Sammy doesn’t overcomplicate things, and perfectly conveys the puzzled remorse in Lorenz Hart’s lyrics.

But Not For Me: A Gershwin tune from 1930’s musical Girl Crazy, Sammy sings the verse with just Robert Bain’s guitar, before Morty Stevens moves to swing time for the refrain (and joins in on clarinet). It’s the best of the few up-tempo numbers on the album, and was a regular in Sammy’s live act for a while after the album’s release.

I’ve Grown Accustomed To Her Face: From Lerner and Loewe’s My Fair Lady, this was ‘sung’ by Rex Harrison (in the talking-on-pitch style he was famous for). Three months after Harrison won a Tony for Best Actor, Sammy stepped into the studio, and after a subtle tip of the hat to Harrison with a spoken introduction, he performed a beautiful rendition of the song, with just the right amount of pathos.

Where’s That Rainbow?: The only song from Rodgers and Hart’s 1926 musical Peggy-Ann to stand the test of time. What’s not to like about Hart’s almost too-clever enjambed rhymes, like “In each scenario you can depend on the end when the lovers agree / Where’s that Lothario where does he roam with his dome vaselined as can be?” In keeping with the album’s theme, Sammy adds back some original down-on-your-luck lyrics which other covers leave out (“Pollyanna stuff, too / Is tough to endure”).