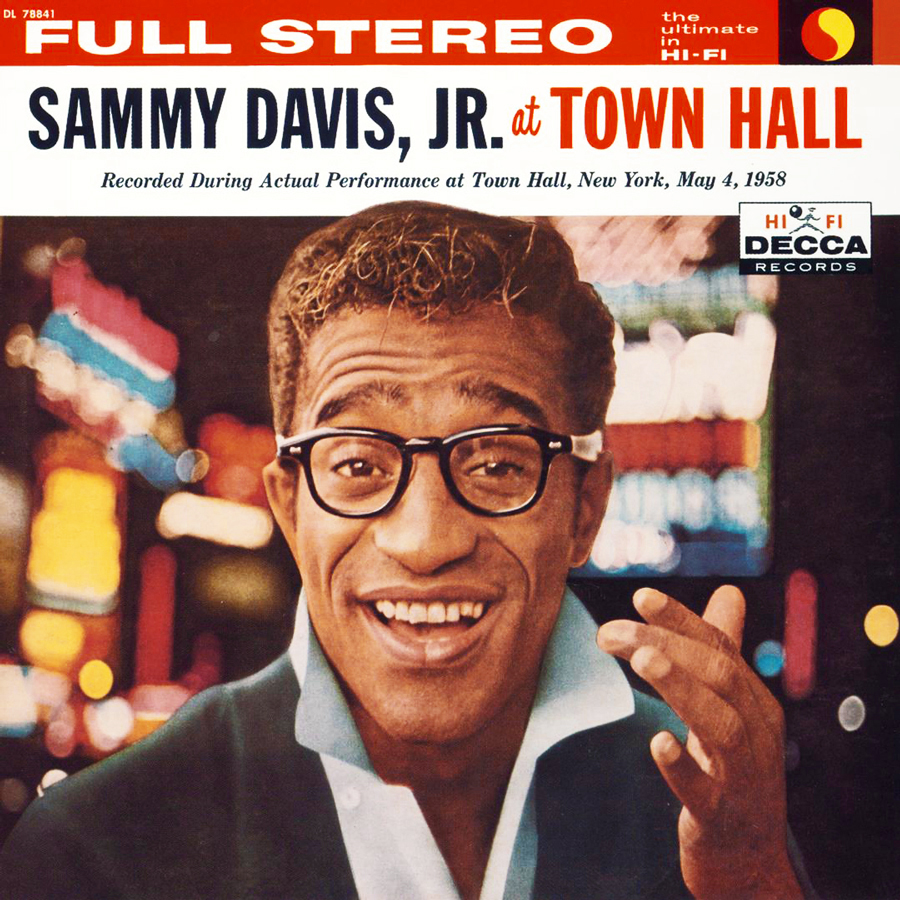 Sammy Davis, Jr. At Town Hall was a milestone album for Sammy Davis, Jr., being his first live album (the first of six he would release over the course of his career) and his first album recorded in stereo. The location chosen was midtown New York’s Town Hall, a landmark venue for live music (known for its architectural egalitarianism, such that there is “not a bad seat in the house”).

The concert was a Sammy Davis, Jr. one-night-only one-man extravaganza charity benefit, being the annual Joey Awards of the Children’s Asthma Research Institute and Hospital (CARIH). Held the evening of Sunday 4th May, 1958, the event lasted four hours, during which Awards were presented to Dr. Harold Abramson, Steve Allen, Herman Hickman, Mike Wallace and Bertram Wolff.

Sammy had agreed to do the benefit pro bono in his capacity as Chairman of the Frank Sinatra Asthma Research Fund, and it was announced that all proceeds from Decca’s release of the live album would go directly to the Institute also. Sammy’s evening’s work was reported to have raised a record $50,000.

Jack Benny made a surprise appearance, and can be heard on the LP introducing Sammy by saying “Sammy Davis, Jr. is probably the greatest entertainer in the whole world…” Bob Hope told a few jokes and introduced Sammy after the intermission. According to Burt Boyar’s newspaper column (reprinted in part on the LP sleeve), for the first half of the show Sammy stuck to singing ‘straight’, while in the second half he gave the audience a taste of what he called ‘nightclub schtick’.

On display is Sammy’s full range of talents – songs he had recorded, songs from his Broadway show Mr. Wonderful, a tap routine, and his impressions. Listeners to the album get a window into Sammy’s on-stage prowess, but hearing the audio only leaves you with the impression you are missing a whole that is greater than the sum of the parts.

The new stereo recording helped in a small way to address this – in the May 1959 edition of HiFi Review, Nat Hentoff writes: “In stereo, more of [Sammy’s] force comes through than in the monophonic version. There is, for example, a tap dancing number that becomes quite realistic as Davis moves from speaker to speaker; and in general, the greater space made possible by stereo makes it appear at times as if your living room has become Davis’ stage.”

A fascinating aspect of late-50s Sammy is hearing his stage patter in between songs. For every song he sings, he knows the origin and the composers and pays glowing tribute to them all – you can tell this is how he queues his conductor Morty Stevens and the band, as he senses the room and decides where to go next with his routine.

You also hear his over-use of the royal ‘we’ and his often cringeworthy self-deprecating language (e.g. “with your kind permission, we humble ourselves greatly”), a technique which enabled him to successfully break the fourth wall with white audiences when The Will Mastin Trio slowly transitioned away from vaudeville, but it became a habit which would plague him for the remainder of his career.

Ethel, Baby: After giving the audience some context, Sammy sings the main duet from Mr. Wonderful as a ballad for one, starting with just the accompaniment of the piano (and some infectious audience coughing). You can sense why Sammy was constantly in the mind of Broadway producers.

How High The Moon: A five-minute tap routine in which you can tell Sammy pulls out all the stops – including throwing in some of Ravel’s Bolero. He is supported primarily by Morty Stevens’ lone clarinet throughout and you can tell this is a piece of Sammy’s act that the two know intimately.

Ol’ Man River: A showstopper; you could hear a pin drop. But this is not to everyone’s taste. Will Friedwald writes in Stardust Melodies: “Sammy can’t make up his mind if he’s trying to work in the tradition of Sinatra and Garland, by doing it intimate and with minimal accompaniment, or big and gut-busting as in the black basso tradition of Bledsoe and Robeson. The end result is unsatisfying, with Davis overacting terribly, as if he were lobbying for an Academy Award”.