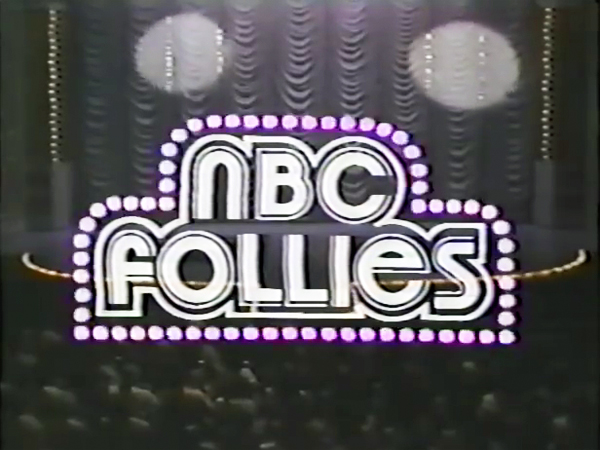 After 8 seasons airing at 10pm Thursdays on NBC, The Dean Martin Show moved to Fridays and the network filled the vacant slot with a new variety show hosted by Sammy Davis, Jr., titled the NBC Follies.

A pilot show, NBC’s Follies, had been aired in February featuring Davis, Mickey Rooney, Andy Griffith and Connie Stevens. The special rated well and the network picked up the show for a full season. The series was first announced on the Tonight Show Starring Johnny Carson on 24 May 1973, when Sammy spoke to Johnny about the creation of a new variety show he’d be hosting in the autumn. “NBC has always been very close to me, because 8 years ago I had a television series that ran in New York – 13 glorious weeks – and I’ve waited a long time and now we’re coming back in the fall and I’m going to have my series again. It’s called the NBC Follies, and it’s all pure entertainment and sketches and fun.”

The show was designed to re-create vaudeville for a modern TV audience: it featured musical performances sung by headliners, comedy sketches with an emphasis on slapstick, and splashy production numbers involving 12 costumed chorus girls called The Follies Girls. It was filmed before a live audience on a stage with a big proscenium arch, and made liberal use of lip-synching to pre-recorded audio to get around the inconvenience of microphones during production numbers. Backing the production were the Carl Jablonski Dancers and the Harper McKay Orchestra. It was produced and directed by Bob Wynn, and with Sammy’s business parter Sy Marsh acting as Executive Producer.

Sammy was featured in every episode, with Mickey Rooney acting as a semi-regular co-host, although neither ‘hosted’ the show in the traditional sense, but instead participated in the lion’s share of segments. Some footage of the show exists on YouTube, including the whole premiere show, and segments of the show with The Lennon Sisters. With Rowan and Martin’s Laugh-In’s cancellation by NBC in March 1973, Sammy occasionally transferred his ‘Here Comes The Judge’ routine, which had been popular on Laugh-In, across to his new show.

Reviews were originally positive (the New York Times called it “pleasantly and attractively entertaining”) but despite some big name guest stars like Jerry Lewis and Milton Berle, the first few weeks saw its ratings struggle against competition such as the legendary Battle of the Sexes tennis match between Billie Jean King and Bobby Riggs in Houston, and TV premieres of big movies on CBS such as Bonnie and Clyde and Guess Who’s Coming To Dinner.

TV Guide wrote: “Variety (the song, dance and skits type) is scarcely the spice of life anymore. The lone new starter this fall, NBC Follies, is no overnight hit.” In November the show’s name was changed to Sammy Davis Starring In NBC Follies, but it didn’t make much difference. The show aired a Christmas special on 20 December, and its final episode was a week later – marking 13 episodes in total. Carl Jablonski was nominated for an Emmy Award in the category of Outstanding Achievement In Choreography for the show, but lost to Tony Charmoli for Mitzi … A Tribute to the American Housewife.