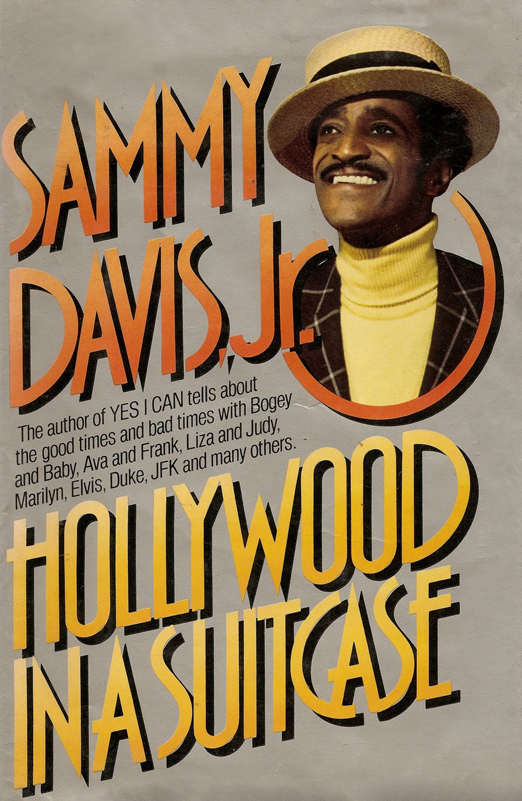 In 1979, over a decade following the publication of his first book, Yes I Can, Sammy Davis, Jr. had recently succeeded in getting his life and career back in order after suffering a drug- and alcohol-fuelled nadir in the mid-1970s. Sammy was celebrating his 50th year in show-business and the time seemed right to pen a part-memoir, part-tribute to his greatest love: Hollywood. The marketing material for the resulting book, Hollywood In A Suitcase, claimed the volume “picks up where Yes I Can left off”. Unfortunately, nothing could be further from the truth. Yes I Can was a groundbreaking celebrity autobiography when it was published in 1965, and still captivates, horrifies, and inspires readers to this day.

Hollywood In A Suitcase, on the other hand, was completely different both in style, in intent, in critical acclaim, and longevity. Sammy wrote in the Preface: “I did not set out to write another Yes I Can – my earlier autobiography – simply because I’ve still got a lot of living to do before writing the final chapters of my life … Movies are my passion. It may be over-indulgence on my part, but I felt the need to share some of this deep feeling with other people.” Never one to shy away from over-indulgence, Sammy knew everyone in the industry, and had a story about everyone to tell. This book was his platform to do just that.

To say that Sammy Davis, Jr. was a cinema aficionado would be something of an understatement. He had one of the most extensive private film collections in Hollywood, and took an inordinate number of movies on the road with him traveling around the world; wherever Sammy was, either at home or a hotel room, he was screening films for his friends. This peculiarity was the genesis of the book’s title.

Sammy was obsessed by movie trivia and used to hold competitions with another film buff, Mel Tormé, in which they would try to catch each other out with some small detail of motion picture history. (The two even went head-to-head with one another on the 1969 celebrity movie trivia game show The Movie Game. The show’s host Army Archerd later recalled “the stars were serious about displaying their savvy about Hollywood and the two best-informed players turned out to be Sammy Davis, Jr. and Mel Tormé.”) 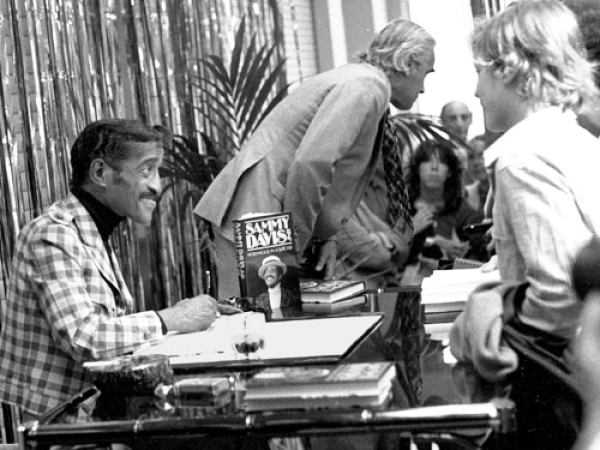 Hollywood In A Suitcase predominantly features Sammy telling anecdotes about the rich and famous, and going off on various tangents about topics loosely related to Hollywood. At its best, the book provides personal insights into some of cinema’s greats: Humphrey Bogart, Richard Burton and Elizabeth Taylor, Judy Garland, Marilyn Monroe, Frank Sinatra, and John Wayne among others. At its worst, the book is a meandering exercise in glorified name-dropping punctuated by superficial personal philosophising.

Given that Yes I Can’s narrative finished in 1961, Hollywood In A Suitcase does, however, contain numerous autobiographical elements, and features Sammy’s first printed thoughts on several key aspects of his life: his time making films with the ‘Rat Pack’, his trip to Vietnam in 1972 and his involvement with Nixon, his interest in pornography, his time in London in the late 1960s – all of which he would later expand upon in a chronological fashion in his final book, Why Me?

Unfortunately for the book’s quality, Sammy’s co-authors on Yes I Can, Jane and Burt Boyar, had moved to Spain in 1969. Sammy engaged former journalist turned biographer Simon Regan as ghostwriter. Regan had worked for the British tabloid News of the World for eight years, and had just finished a particularly undistinguished biography of Prince Charles titled Charles – The Clown Prince. Regan travelled with Sammy on and off over the course of a year, recording Sammy’s thoughts on tape before turning his reminiscences and opinions into prose. (Regan later became quite the scandalmonger and conspiracy theorist, founding the muckraking publication Scallywag, which was successfully sued for libel by the British Prime Minister John Major in 1993.)

When Hollywood In A Suitcase was published in September of 1980, critical reaction was lukewarm. Elizabeth Comegys of United Press International wrote: “It is gossipy and entertaining in an inoffensive, straightforward way”. Carol Olsen in the Arizona Republic: “The versatile performer has drawn upon his 30-year career in Hollywood to produce this highly forgettable collection of reminiscences and anecdotes about the entertainment business”. The book sold well enough, however, and found success in paperback in subsequent years. 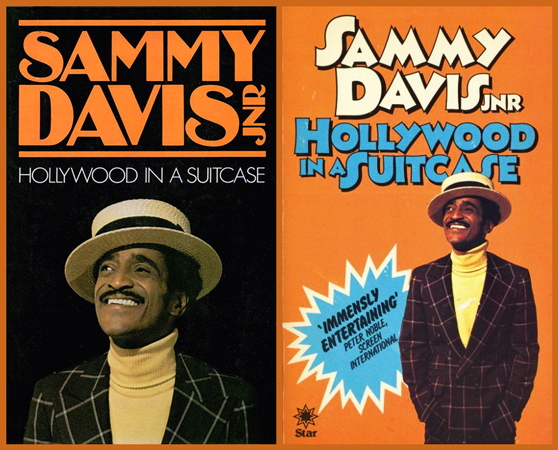