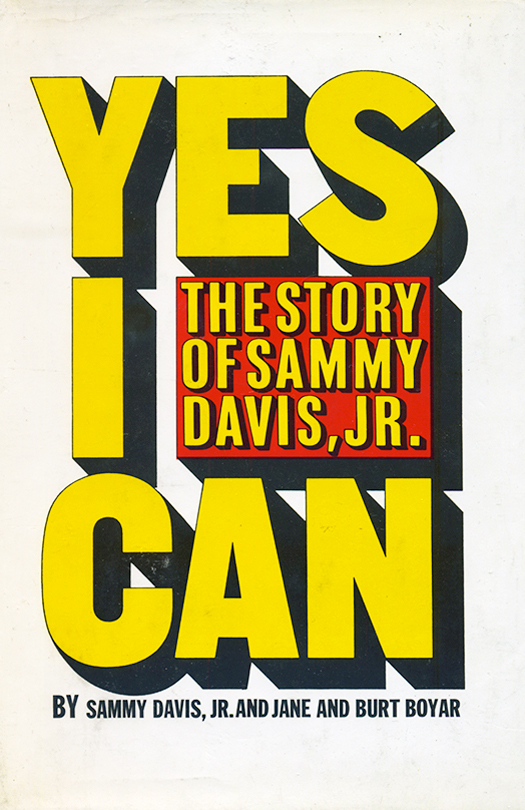 When it was published in September 1965, Yes I Can quickly became a critical and commercial success – widely acclaimed for its engrossing tale of life as a black performer in segregated America, and for level of honesty unusual in celebrity autobiographies of the time. For anyone wanting to understand Sammy Davis, Jr. it is required reading.

The book traces Sammy’s life from growing up ‘on the road’, through the naked racism he experienced in the army, to the struggle to make it as a dance act post-vaudeville. It details the loss of his eye in a car accident and subsequent conversion to Judaism, his success on Broadway in Mr. Wonderful, his relationship with Frank Sinatra, and his courting of and marriage to May Britt – all told through the unmistakeable prism of discrimination. The narrative finishes in mid-1961 with the birth of his daughter Tracey.

Readers found the story both candid and inspirational, but not always flattering to Sammy: “If a guy stops reading in the middle, he’ll hate me. In the beginning, he’ll like me. Maybe he should read the beginning and skip to the end”, Sammy said. (Most of Sammy’s major activities in support of civil rights were excluded having occurred after 1961, but would have been known to many readers.) The book was shortlisted for the 1965 Pulitzer Prize, and soon found its way into school curriculums, where over the years it has provided many students with their first insight into the black experience in America.

On The New York Times bestseller list for 28 weeks, Yes I Can has subsequently stood the test of time as a seminal celebrity autobiography. It was, however, almost exclusively the work of Sammy’s close friends Burt and Jane Boyar. Sammy told Newsweek in advance of the publication: “I did not type a letter. I did not put one syllable on a piece of paper.” Specific stylistic decisions made by the Boyars contributed to Yes I Can keenly capturing the zeitgeist in 1965. 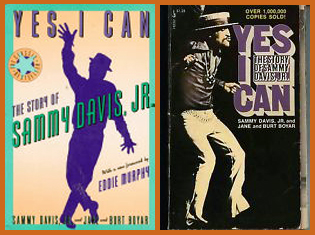 Burt Boyar had come to Sammy’s attention in the mid-1950s. Sammy’s father Sam Sr. was an avid reader of the Morning Telegraph, a newspaper almost exclusively devoted to horse-racing – except for a lone column called “Burt Boyar’s Broadway”. While Sammy was starring in Mr. Wonderful on Broadway in 1956, Boyar and his wife, Jane, met Sammy for dinner to generate some column material. The three hit it off immediately, spending countless other evenings together and ultimately becoming lifelong friends.

The genesis of Yes I Can was Burt and Jane’s growing awareness of the constant snubs and slights – some small, some significant – suffered by Sammy living his life as a black man in America. They happened even to a man of his star status. Initially conceived as a novel about a semi-fictional Negro entertainer, the aim was to convey the pain of experiencing prejudice to an audience which didn’t get it. Prompted by the suggestion of literary agent Scott Meredith that they write a biography instead, the Boyars approached Sammy with a different proposition again: an autobiography. Sammy loved the idea. 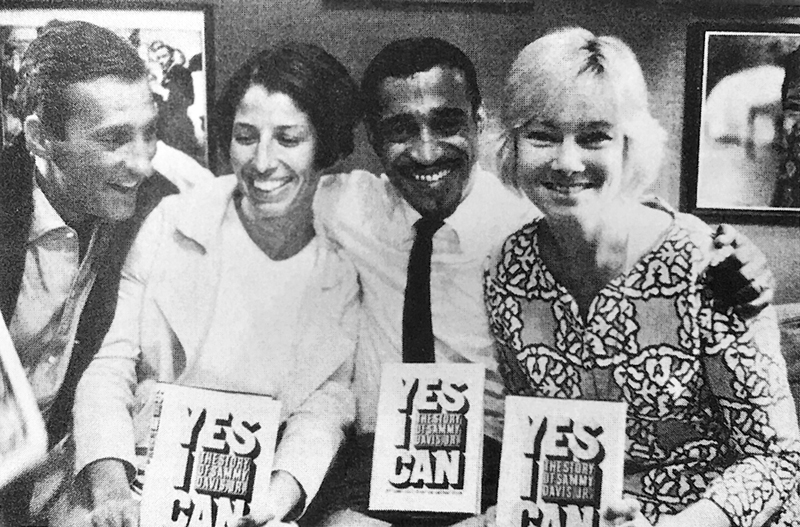 Around 1961, Burt took a leave of absence from his column, and Burt and Jane began the long process of research and writing – interviewing friends and family, and talking to Sammy every night for hours wherever in the world he was performing. By 1963, the Boyars found themselves with a mammoth 1,000 page manuscript which no publishing house in New York would touch – and they had tried them all.

The Boyars had made two choices which made their chances of finding a publisher remote, but ultimately contributed to the book’s popular appeal once published. Firstly, the text eschewed the usual dates, facts, and detail that were found in the average biography of the time – instead Yes I Can was written with a strong first-person narrative drive that focussed on the story first and foremost. Secondly, the book consisted predominately of dialogue (obviously invented) between Sammy and the people in his life. These choices gave the book the qualities of a captivating novel, a movie on the page, and readers loved it.

Finally, Roger Straus of Farrar, Straus and Giroux agreed to publish it, after which the book went through years of editing hell. The first editor insisted on third-person voice, the second editor re-wrote Sammy’s language to improve his grammar to Eton quality, the third editor wanted to change Sammy’s rationale for conversion to Judaism as well as his attitude to civil rights, and the fourth editor cut whole swathes of the manuscript until several threads of the story no longer connected. The Boyars rejected all these changes, and these editors. Eventually, Roger Straus decided to edit the book himself – and successfully cut material without altering the integrity of the book.

At a still-too-long 630 pages, Yes I Can was scheduled for release in the autumn of 1965. In 1964, Sammy had opened on Broadway in Golden Boy and the book’s final title had been taken from a song written for Sammy’s character Joe Wellington by Charles Strouse and Lee Adams. The life-affirming number “Yes I Can” was actually cut from the show during try-outs as the production moved from Philadelphia to Boston, despite the fact that Sammy had already recorded it for Reprise Records. Following the autobiography’s success, the song was returned to the show for Golden Boy’s London run in 1968. 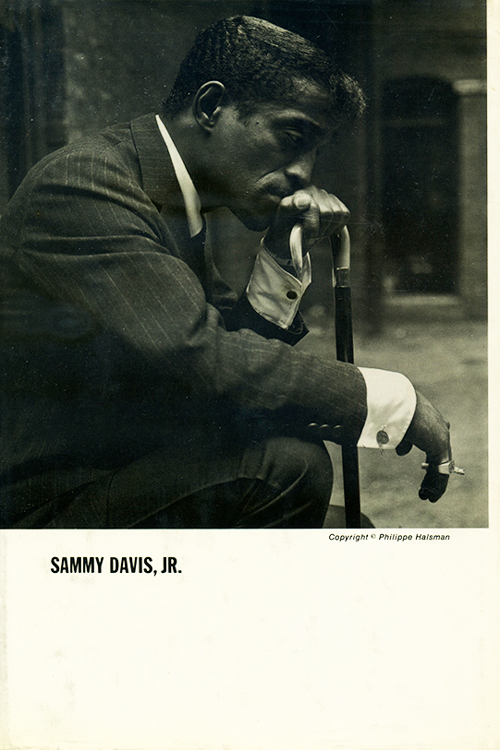 Sammy Davis, Jr., the Boyars, and Straus were all delighted to read the first wave of overwhelmingly positive critical reaction. On Sunday 19th September 1965, Yes I Can was scheduled for front page reviews in both The New York Times Book Review magazine and the New York Herald Tribune’s Book Week magazine, an unheard-of feat for a celebrity autobiography. Martin Duberman in The Times: “We have learned much of the Negro’s mistreatment, but the trials of a single man, when recounted as vividly as Sammy Davis, Jr.’s are in his lengthy autobiography, renew and redouble the shock.” Maurice Dolbier in the Tribune: “One of the most candid, engrossing and important American autobiographies of our time”.

However, on Thursday 16th September the editorial and clerical workers at New York newspapers belonging to the American Newspaper Guild went out on strike in a contract dispute over automation. Both The Times and Herald Tribune were shut down well into October – hence few ever read the glowing front-cover book reviews of Yes I Can, as they weren’t actually published. Despite this setback, the book received some television publicity and was reviewed in other newspapers across the nation. It soon found its way into the various bestseller lists where it remained for over a year, especially once printed in paperback by Pocket Books in October 1966.

Was Yes I Can an honest account? Perhaps no less so than most other autobiographies; some stories certainly played fast and loose with the truth (joining a Special Services division in the Army, and the circumstances around Sammy’s attempted suicide, for example). The overall tone engendered a degree of sympathy that some in Sammy’s entourage found undeserved and self-serving. However, as Sandra Schmidt wrote in her review for the Christian Science Monitor: “So it does not matter that the writing of Yes I Can is sometimes pedestrian, that it reads in places like a B-grade novel, that it’s melodramatic, and that its incidents seem now and then far-fetched. It contains some basic truths that override such flaws.” These truths are what has kept Yes I Can relevant to audiences for decades.