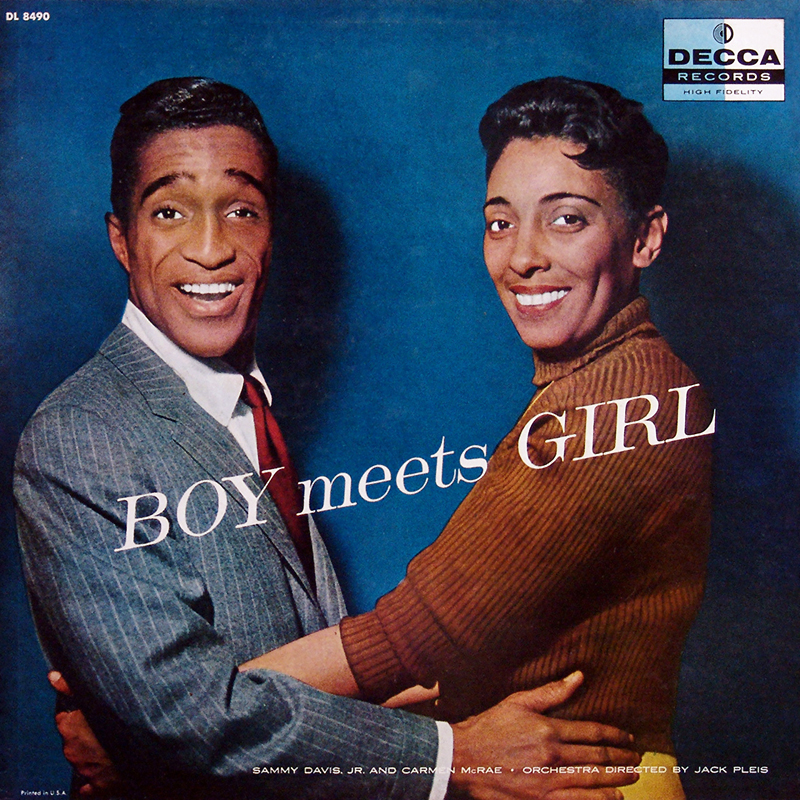 In 1954, Milt Gabler, Decca Records’ A&R executive, signed both Sammy Davis, Jr. and Billy Holiday protégé Carmen McRae to recording contracts, and so at some point it made sense to pair Decca’s two new stars together (McRae was Down Beat Magazine’s ‘Best New Female Vocalist of 1954’, and in August that year Sammy had the #1 single on the CashBox charts).

In early 1955, together they recorded two duets: “A Fine Romance” and a brand new novelty number given a cha-cha beat, “I Go For You”. Despite Sammy and Carmen’s obvious chemistry (of “A Fine Romance” Billboard said: ‘They make an appealing duo, getting the most out of the ditty’s clever lyrics’), the resulting single didn’t sell particularly well.

Meanwhile, Decca Records had their own pairing of top talent to throw into the mix, and in February 1957, Sammy Davis, Jr. and Carmen McRae reconvened behind a microphone in New York, this time to record a full length album, Boy Meets Girl. Sammy’s tomfoolery can occasionally grate, but the two sound like they are genuinely having fun, and Sammy plays it straight on enough of the tunes to balance out the horseplay. With Jack Pleis’s winsome arrangements keeping the duo swinging, the result is a particularly charming disc with numerous delightful moments.

AllMusic’s review by Tim Sandra accurately describes the LP’s mood: ‘Sammy goofs his way through the album, casting asides like a wisecracking kid, while Carmen sails along like the consummate pro she always was. They achieve a perfect balance between sophisticated charm (McRae) and eager-to-please hamminess (Davis), and the record is a joy from beginning to end.’

11 new sides were cut of top drawer material (Gershwin, Porter, Berlin, Rodgers, Hart, etc) and placed with “A Fine Romance” for inclusion on the LP, which was released in August 1957. CD reissues later added “I Go For You” as a bonus track. While neither artist was at the peak of their powers in 1957, this is an oft-overlooked marvel for aficionados of vocal jazz.

Who Cares?: Michael Feinstein considers this a must-hear: “Sammy and Carmen are so casual about this performance, not in the way they sing but in their collaboration. Carmen takes a chorus, Sammy takes a chorus, they scat and then come together at the end, and you can tell it’s something that magically happened in the studio. It’s a great, swinging rendition of the song.”

There’s a Small Hotel: Davis and McRae are at their romantic best on this Rodgers & Hart number, which was being featured at the time in the 1957 film Pal Joey.

Baby, It’s Cold Outside: This take on Frank Loesser’s famous call and response holiday novelty will put a smile on your dial; you can tell they’re both grinning through this, and Sammy cracks Carmen up several times!