Sammy Davis, Jr. loved all things country and western. Sammy was a famous film aficionado and with that came an appreciation of westerns – unsurprising given their place as the quintessential home-grown American movie genre. Sammy had helped pioneer a place for the ‘black cowboy’ in popular culture (even though in reality up to a quarter of workers in the range-cattle industry from the 1860s to 1880s were African Americans). He had appeared on several westerns in the 1960s and 1970s, including on TV shows such as Lawman, The Rifleman and The Wild Wild West, and in movies like The Trackers and Gone With The West.

Sammy was a skilled fast draw and gun-spinning exponent, and built a routine around the song “Streets of Laredo” that he often included in his live performances. On vinyl, Sammy could occasionally be found adding touches of country into his recordings, and he knew and worked with many who went on to be movers and shakers in the Nashville music scene. Kenny Rogers and Sammy had been stablemates at Reprise in the late 1960s and remained good friends – so it was Rogers’ long-time producer Larry Butler who answered the call in 1981 when Sammy decided to make a country album, Closest Of Friends. It would be Sammy’s first proper studio LP since 1974’s That’s Entertainment, and his last. 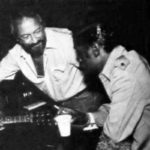 Butler had produced many of Johnny Cash’s biggest hits during the 1970s, and co-wrote “Another Somebody Done Somebody Wrong Song”, which won the Grammy Award for Best Country Song in 1976. In 1980, Butler won a Grammy for Producer of the Year, to date the only country record producer to do so. Theoretically, Sammy was in excellent hands. Butler assembled a who’s who of Nashville sidemen for the sessions and had string arrangements done by Bill Justis, a respected country arranger who had been a pioneer rock-and-roll musician in the mid 1950s. Sadly, Justis passed away two months after Closest Of Friends was released.

In July 1981, Sammy headed to the Sound Emporium in Nashville to lay down ten tracks. It was a time of rapid technological advancement in the studio; the United States’ first digitally-recorded LP had been released only 12 months earlier. Sammy was keen to try out the new cutting-edge technology, and the album was recorded digitally (which may have contributed to its slightly wooden and very processed sound). The song selection saw Sammy taking on material by some of Nashville’s best writers – including Don Gibson, Merle Travis and Tex Williams – and included a pair of songs by Kris Kristofferson, as well as Larry Butler’s own “Another Somebody Done Somebody Wrong Song”.

Sammy said about the album at the time: “I love country music. This is not country-country. I mean, I’m obviously not T. Texas Tyler, but it’s country-flavoured. Some original songs, a couple of standards.” In Sammy’s mind Closest Of Friends may not have been ‘country-country’, but it was definitely country. Although Sammy is in decent vocal form throughout, in retrospect the music sounds a bit hokey and antiseptic. The whole exercise comes across as an ill-advised vanity project – albeit one which Sammy had well and truly earned after 45 years in the business.

Closest Of Friends was released in May 1982. On Saturday 14th of that month Sammy appeared on the long-running country variety comedy show Hee Haw to promote his new album. He enjoyed it so much that he visited several times over the next year, telling Hee Haw’s producer Sam Lovullo: “I come here to have a good time. I want to jump in the cornfield and have some of your country corn!” He returned in October, duetting with host Roy Clark on “The Lonesome Road” and singing “Oh, Lonesome Me” and “We Could Have Been The Closest Of Friends”, and returned again the following January.

The LP was released on Applause Records, which was a short-lived label started in 1981 by Arthur Mogull (who had been an executive at Warner, Capitol and MCA, and been co-owner of United Artists Records). Applause intended to showcase ‘middle of the road’ artists in whom the big labels were no longer interested. It released original albums by Tony Martin, Buddy Greco, Jack Jones, Robert Goulet and Shirley Bassey before closing in 1983, possibly because the record-buying public were no longer interested in them either. Times would change, though, and these artists would undergo a resurgence in popularity during the lounge and swing revival of the 1990s.

Closest Of Friends was Sammy Davis, Jr.’s 53rd and final original album. Unfortunately, the album had a particularly sour aftertaste for Sammy fans. Over the next 30 years these ten country cuts provided easily licensable material for producers of misleading cut-price ‘Rat Pack’ compilations and phoney Sammy Davis, Jr. ‘Greatest Hits’ collections. This tragedy was a final indignity heaped upon an expansive 33-year recording career that has been criminally under-reissued, and been consequently under-appreciated.

Smoke, Smoke, Smoke (That Cigarette): Opening with a put-on wheeze, this cover of Tex Williams’ talking-blues hit from 1947 is the standout track on the album, both from an artistic point of view and as a sadly macabre foreshadowing of Sammy’s future throat cancer. It’s a great choice of song for Sammy because his love affair with the cigarette was well known – rarely was he seen without one across his entire career, and even toward the end he needed them as props from force of habit. The narrator style of the song lets Sammy do a bit of performing which is when he’s at his best. Of course, lyrics like the boast “I’ve smoked ’em all my life and I ain’t dead yet” make it an uncomfortable listen. Applause released it as a single and it made #89 on the Country charts in December of 1982.

Hey Won’t You Play (Another Somebody Done Somebody Wrong Song): BJ Thomas’s original topped the Billboard Hot 100 in 1975 and became the song with the longest title ever to do so! Since then it had been covered by many artists, including those as prominent as The Muppets and Alvin and The Chipmunks. Co-written by Sammy’s producer Larry Butler, it was an obvious inclusion for Sammy, who does an engaging job with this well-worn classic. Sammy provides just the right degree – not too much! – of requisite country music pathos.

Mention A Mansion: The only original song on the album, written by Debbie Hupp and Bob Morrison. Hupp was a Kentucky mother of five who began writing songs while working in a liquor distillery as a nightwatchman. She developed a writing partnership with the prolific songwriter Morrison and they wrote the #1 Country hit “You Decorated My Life”. Hupp went on to become a board member of the Nashville Songwriters Association International. “Mention A Mansion” wasn’t nearly as successful, though, but its uptempo nature and lyrics celebrating profligacy do let Sammy have a bit of fun.

The River’s Too Wide: Originally recorded in 1973 by Jim Munday (#13 on the Billboard Country chart), and in 1974 by 26 year-old bombshell Olivia Newton-John (her Aussie vowels are about as broad as the river she sings about). Overall, the song suits Sammy’s voice, which manfully emerges from the cloying support of the background vocals. The arrangement even allows for some finger snapping toward the end to close the song, the album, and Sammy’s career on long-play vinyl.