Without a doubt the most significant career development for Sammy Davis, Jr. in the 1960s was his decision in 1963 to return to the Broadway stage, and to take the leading role in a musical version of the Clifford Odets stage play Golden Boy.

The musical had major repercussions for Sammy: professionally (he wouldn’t be entirely finished with the show until September 1968), politically (the show’s interracial romance was highly controversial), personally (by the conclusion of Golden Boy’s run on Broadway he was effectively separated from his wife, May Britt) and physically (his voice suffered enormously during 1964, and arguably never truly recovered).

Opening night on Broadway was 20th October, 1964, but Sammy and the company had suffered through 16 weeks on the road in Philadelphia, Boston and Detroit, with multiple re-writes necessitating rehearsal during the day and performance at night. Given Sammy sang in 11 of the show’s 16 numbers, one clear consequence was the toll taken on his voice. In both Detroit and in previews in New York Sammy suffered from hoarseness, and what he referred to as bouts of laryngitis.

In truth, Sammy had doubtless developed vocal nodules, which notably affected his singing (and which in most cases require complete rest or surgery to resolve). In Golden Boy’s initial weeks after opening, Sammy struggled through, however, and any deficiency in his singing was made up for in the energy of his performance.

Capitol Records had invested over a quarter of a million dollars in Golden Boy’s production in exchange for the rights to the cast album. It had heavily promoted the score (music by Charles Strouse and lyrics by Lee Adams), which in 1964 directly translated to ticket sales. So, there was no postponing the cast album recording, set for 25th and 26th October. Despite the parlous state of Sammy’s voice, Capitol completed its recording, and released the LP in November. It debuted on the Billboard charts in December, peaked at #36 and remained on the charts for 16 weeks.

Sammy was justifiably unhappy with the Capitol recording. The following April, when his voice had somewhat recovered, he convinced the powers-that-be at Capitol to let him re-record four numbers from the show: “Night Song”, “Stick Around”, “I Want To Be With You” and “Can’t You See It”. Despite being in better voice in the 1965 cuts, some critics have suggested that Sammy is actually in better character in the 1964 recordings, and that the re-recordings lack a certain je ne sais quoi in comparison to the grittiness of the original. 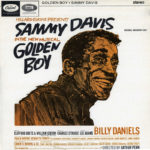 Capitol re-released the album, making two other changes along the way. Firstly, they switched in the instrumental piece that accompanied the big boxing match finale to close the LP, which meant removing the haunting reprise of “Gimme Some” that actually closed the show on stage. Secondly, they changed the cover art – replacing the provocative image of an interracial embrace with a brushstrokes portrait of Sammy. No doubt a marketing decision made for a variety of reasons…

Strouse and Adams’ ambitious urban-inspired score is considered by critics to be some of their best work – despite its tortured path to opening night. In the end, Strouse and Adams wrote over 50 songs for the production, and “Can’t You See It” was first performed at the matinée the day before opening night in New York!

The impact of the score’s unconventional (for Broadway) jazz and gospel sounds combined with the power of the lyrics provided numerous highlights, such as the scene-setting “Night Song”, the gangster number “While The City Sleeps”, and the big duet ballad “I Want To Be With You”. And … don’t forget the show’s big production number, “Don’t Forget 127th Street”.

Golden Boy remains a rarely-revived Broadway curiosity – it was a landmark cultural event, a one-man tour-de-force, a bold and different sound for the Great White Way, and – when all was said and done – a bit of a mess. The cast album remains both an enjoyable listen of a great score, and a fascinating time capsule of a crucial moment in the career of Sammy Davis, Jr.

Night Song: One of the best “I Am” songs in Broadway history, Sammy’s first number in the show perfectly sets the scene. In his spoken introduction to the song on a Golden Boy demonstration record, Sammy sets up the song in this way: “Joe, having had the argument with his father … goes to the only place where he feels that he belongs: the roof of the tenement, which is his own special world.”

No More: When Joe is left devastated and embittered at Lorna’s rejection, he sings this gospel-tinged paean to defiance, supported by the entire company: “I ain’t bowing’ down no more!” Laced with political subtext (“Shed my skin for you? No more. Oh, I worshipped you, that you can’t ignore. But I ain’t your slave no more!”), this was Martin Luther King, Jr.’s favourite number when he came to watch the show, its message of resistance resonating with him.