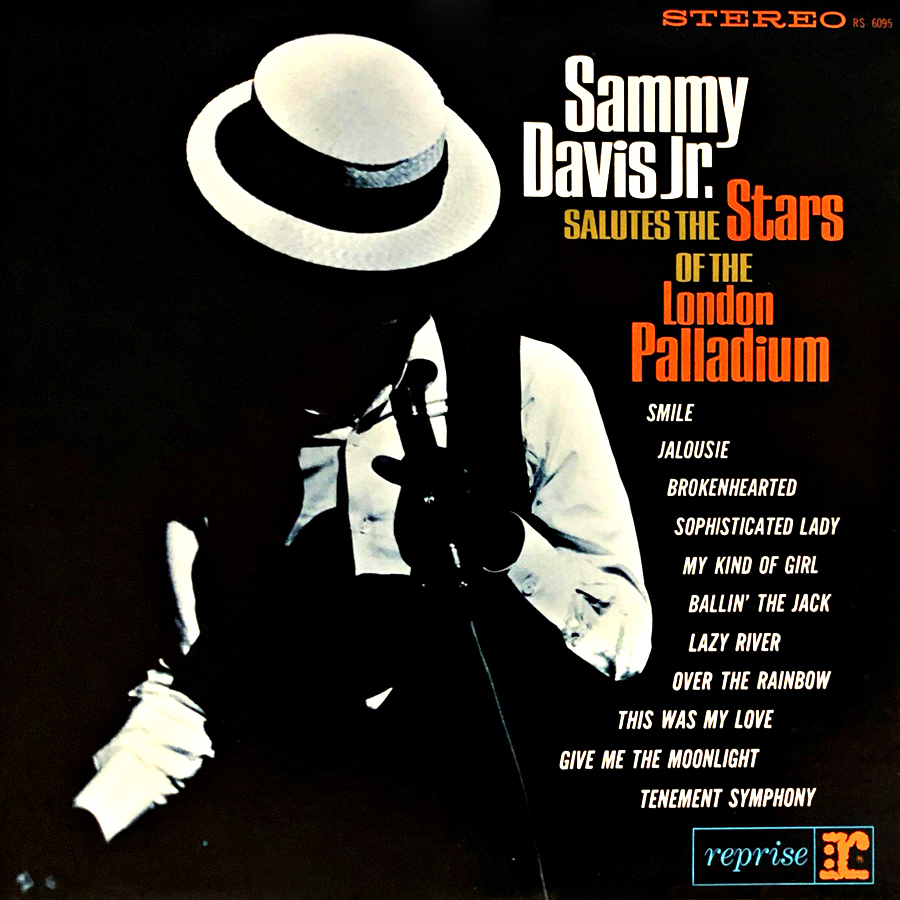 If there were to be a perfect marriage of venue and performer, there could be no better match than Sammy Davis, Jr. and the theatre that had become widely heralded as ‘The World’s Leading Variety Theatre’: The London Palladium. The Palladium had been built in 1910, and over the subsequent half-century, it cemented for itself its reputation based on the ‘who’s who’ roster of stars who had appeared there. This was particularly true during the 1950s and 1960s, when Val Parnell was its managing director – he adopted a controversial, but very successful, policy of presenting high-priced, big-name American acts. In the early 1960s, Sammy Davis, Jr. was at the top of Parnell’s list.

In 1963, Sammy signed on for a five week season at the Palladium; it would be his third visit to London, having performed at the Club Pigalle in 1960 and the Prince of Wales in 1961. He arrived at the end of March and was greeted by a gleaming Rolls Royce for his own personal use. He spent a week in Liverpool performing at the Empire Theatre before beginning five weeks at the Palladium on 8th April, finishing with nights in Leeds, Glasgow, and Brighton, before closing with one night only on 19th May at London’s swanky nightclub The Talk of the Town.

In those five weeks at the Palladium, however, Davis set London alight – marking new attendance records at the Palladium (the New York Post reported on the achievement, calling it “the greatest triumph of them all”), taping a one-man television special for the BBC called Meet Sammy Davis, Jr., and heading into the recording studios of Reprise Records’ UK partner, Pye Records, to lay down tracks for a new LP paying tribute to the London Palladium itself.

The conceit of this album was to record songs associated with some of the famous stars who had graced the Palladium’s stage over the years. Legendary British bandleader Ted Heath and his big band was Sammy’s first choice for accompaniment, but due to being contractually obligated to Decca Records he was sadly not available. Heath’s longtime arranger, Scotsman Johnny Keating was brought in to do the brass arrangements, while the string arrangements were handed to English composer and arranger Peter Knight, Sr. (his son, Peter Knight, Jr. was an A&R Manager at Pye Records at the time).

The artists chosen, the year they appeared at the Palladium, and the songs chosen to represent them were:

In general, the brass numbers fare better than some of the five cuts with string backing. In particular, “Jalousie” and “This Was My Love” are over-elaborate and over-orchestrated. A clear exception is “Over The Rainbow”, a touching reading by Sammy in which he is given beautiful string support and an interesting arrangement: he begins with the song’s release (“If happy little bluebirds fly…”), before then moving to the verse (which Garland herself almost never sang). Meanwhile, “Ballin’ The Jack” and “Lazy River” are classic swinging Sammy romps of the highest order.

Sammy Davis, Jr. is perfectly at home inhabiting the worlds of the eclectic range of performers he pays tribute to on this LP, and even though you know he could do it if he wanted to, he chooses to perform these tunes without even a hint of his capacity for impressions creeping into his interpretations – and in making that choice, he helps make the material his own. At the end of the day, this is a high-concept album that really works. Sammy Davis Jr. Salutes The Stars Of The London Palladium spent 3 weeks on the Billboard Top LPs Chart.

My Kind Of Girl: Written by Sammy’s favourite composer Leslie Bricusse, this was the most contemporaneous hit on the album, with Matt Monro’s 1961 recording spending 14 weeks on the Billboard Top 100. This is a great track – the melody happens to really match Sammy’s finger-snapping swinging style, and the arrangement allows Sammy to start and finish with the intimacy of solo bass accompaniment, while really belting it out in between!

Sophisticated Lady: Peggy Lee’s long-time pianist Lou Levy had a mock toast he would use at parties: “Here’s to all the guys who died coming out of the bridge of ‘Sophisticated Lady’.” The famously tricky melody sees Sammy hit some delightful bass notes – part of an outstanding arrangement of Duke Ellington’s classic jazz tune. Peter Knight creates exactly the right mood for Sammy to provide a restrained and bittersweet reading.

Tenement Symphony: From the 1941 Marx Brothers movie The Big Store, Tony Martin sang it in the film surrounded by a children’s choir. He would later describe it: “It was just before World War II, and we thought we had a song that had a message of good will between people. Perhaps we could thwart the inevitable”. Groucho Marx disagreed, calling it “the most god-awful music I ever heard”. Maybe the truth is somewhere in-between! The lyrics are part stereotype reinforcement, part pro-pluralist schmaltz, but Sammy powers on through and gives it his all.

Give Me The Moonlight: The signature song of English singer Frankie Vaughan. In his liner notes to the Warner Jazz CD release, Keith Chadwick writes that Sammy’s recording “has two spoken codas, one (for the UK market) so politically incorrect as to make you wince, the other (for the US) something of a let-down.” He’s not wrong – the UK ending might have been so bad that it required removal for release in the US … in 1964!