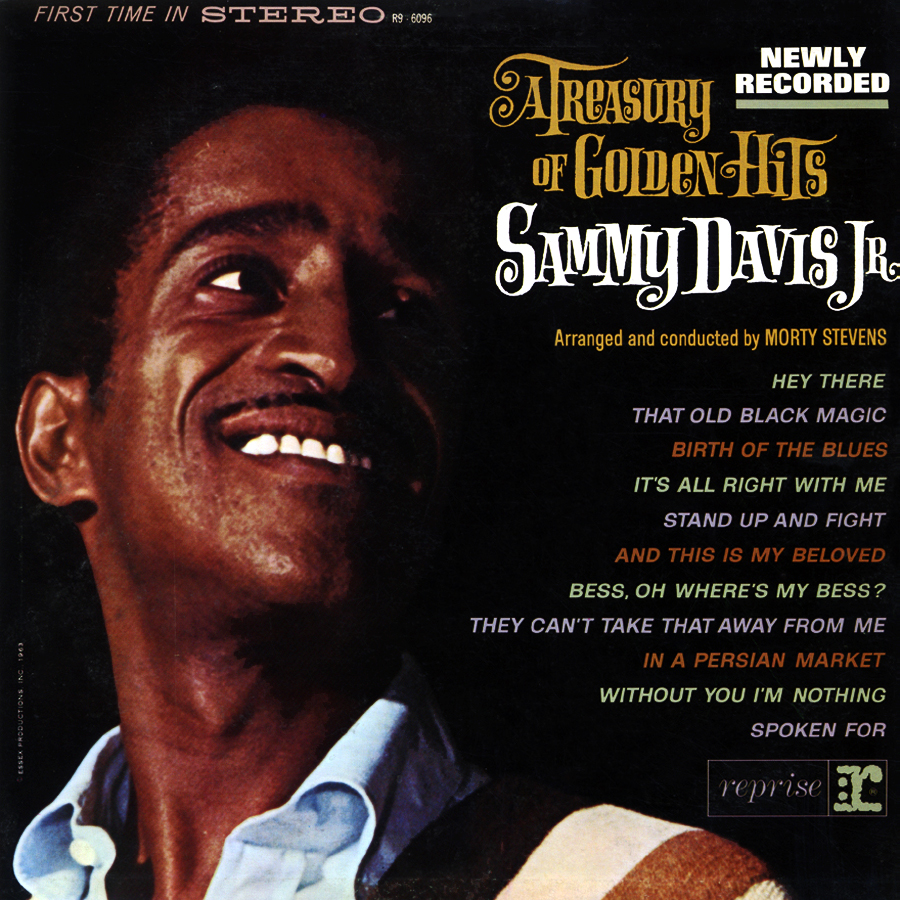 In August of 1963, Reprise Records released Sinatra’s Sinatra, an album in which songs that had been successes for Frank Sinatra on his previous record labels, Columbia and Capitol, were re-recorded – the gimmick being that they were now being presented in stereo sound for the first time. It’s presumably no co-incidence that the same month, Sammy Davis, Jr. stepped into the Reprise recording booth to lay down tracks for an LP with identical intent.

After all, Capitol had released a Sinatra compilation LP in July 1962 (which went to #15 on the charts), and Sammy’s previous label, Decca, released their own Davis compilation LP, Forget-Me-Nots For First Nighters in April 1963. Reprise clearly wanted to compete with its artists’ old labels on the turf of its artists’ old recordings.

Despite having nowhere near the degree of success at Decca that Frank had at Capitol, Sammy nonetheless had a number of tunes which were now associated with him in the popular culture consciousness: most notably “Hey There”, “The Birth of the Blues”, “That Old Black Magic” (all of which were Billboard charting singles), and songs from Porgy and Bess and Mr. Wonderful (in which he had starred).

However, branding the resulting album as a ‘treasury of golden hits’ might have been gilding the lily slightly – of the remaining eight cuts, only one of the originals had been a charting single (“In A Persian Market” spent all of one week on the UK charts in 1956). To be fair, five of the album’s 11 recordings did originally appear on Starring Sammy Davis, Jr., Sammy’s most successful LP and his only Billboard #1 album.

All re-recordings were given new charts by Morty Stevens. In most cases, he was taking a second pass at songs he had originally arranged – the exceptions being “And This Is My Beloved” and “Hey There” (Sy Oliver), “Bess, Oh Where’s My Bess” (Buddy Bregman), and “Spoken For” (Joesph Gershenson).

Each song on the album is, in and of itself, a fine recording; Sammy is clearly a more mature singer than he was at Decca. Because the album acts as a ‘best of’ exercise, by definition the song selection is somewhat random, and the lack of thematic link limits the LP’s overall impact. Furthermore, between them, Stevens and Davis occasionally struggle to find truly new takes on the originals.

On the whole, though, this is a thoroughly enjoyable album for Sammy Davis, Jr. neophytes and aficionados alike, providing some of Sammy’s most well-known numbers with both top-notch instrumentation and vocal interpretation.

Hey There: For years, this was Sammy’s signature tune, his first hit. Morty Stevens gives the re-make a brilliant Latin beat, which revitalises the tune for the bossa nova revolution the US was going through in the early 1960s. The way Sammy effortlessly sambas his way through is a delight.

It’s All Right With Me: When Sammy recorded the Cole Porter classic for Decca, it was a 6-minute tour-de-force, and happily Stevens and Davis decided to go the same route again this time around. While we miss out on Morty’s clarinet solo as in the original, the mid-song interlude swings something fierce, and the interplay between the vocals and the dual accompaniment of the solo guitar and wailing big-band is classic Sammy.

And This Is My Beloved: From the musical Kismet, which re-purposed the music of Russian composer Alexander Borodin (in this case, his String Quartet No. 2). Before Sammy sang this on his first live album, At Town Hall, he introduced it thusly: “This is a song that’s always held a very special spot of the things we’ve recorded. This particular song has always been my family’s favourite.” So, it’s not surprising to see him take a second pass, with a lush but tasteful string arrangement from Stevens.

Stan’ Up An’ Fight: A second piece re-purposed from a classical musical source (The “Toreador Song” from Georges Bizet’s opera Carmen), this is from the musical Carmen Jones, Oscar Hammerstein II’s transformation of Carmen to a World War II-era African-American setting. Sammy clearly took a liking to this number, the soliloquy of a boxer; when he recorded this he was already in early preparations to play a boxer in Golden Boy on Broadway.