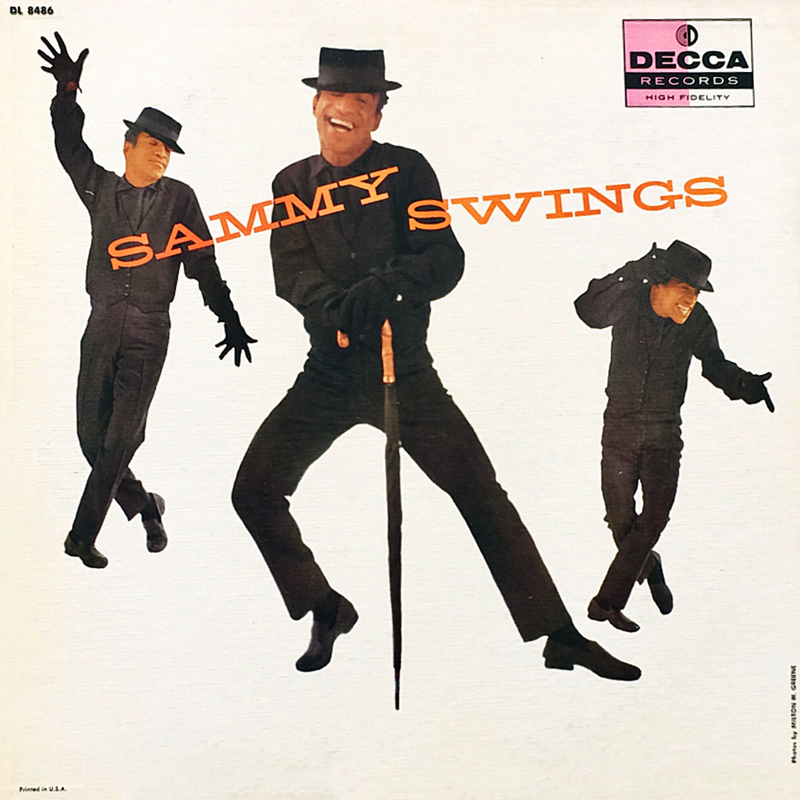 When considering Sammy Davis, Jr.’s early Decca output, it can be handy to keep an eye on what his mentor Frank Sinatra was up to over at Capitol. In March 1956, Sinatra released Songs for Swingin’ Lovers, which is considered one of the greatest albums of the era. He followed it up with A Swingin’ Affair, which was released in May 1957.

Also released in May 1957 was Sammy Swings, an album primarily emanating from sessions at the end of 1956. So, can Sammy swing, too? This album is evidence that the answer to that question is a resounding yes! The album overall is very much up-tempo, with Sammy clearly feeling more comfortable behind the microphone. The material is also a vast improvement over his previous release Here’s Lookin’ At You, with all songs except two being popular standards written between 1933 and 1942.

The two exceptions are “Don’cha Go ’Way Mad” (which had been first released by both Harry James and Ella Fitzgerald seven years earlier in 1950), and a more contemporary tune in “Oo-Shoo-Be-Doo-Bee” – a nonsense song which had been recorded in 1952 by Dizzy Gillespie with vocals by Joe ‘Bebop’ Carroll, who also wrote the song. Sammy uses it as an opportunity to unleash his distinctive scat repertoire; his scat repertoire later reappears on the album’s closing track, “Perdido”, to greater effect.

Along with orchestras conduced by Sammy’s regular partners Morty Stevens and bandleader Sy Oliver, this album contains Sammy’s first collaborations with Jack Pleis to appear on LP (they had already worked together on an EP of four songs from Guys and Dolls released to capitalise on the film release). Pleis was a child prodigy classical pianist with a background in jazz, who had become an in-house arranger, conductor and composer for Decca in 1953.

Along with “Oo-Shoo-Be-Doo-Bee”, the four Pleis-arranged tunes in particular bring some humour to proceedings, such as the ending on “The Lady’s In Love With You”, the custom lyrics to “Will You Still Be Mine?”. Notable also is Sammy’s re-recording of “That Old Black Magic”, with a much faster tempo than his 1955 version, but with the same playful schtick at the conclusion (‘you’re a dirty robber!’). While by no means Sammy’s best, this album will keep a smile on your face as it keeps your toes tapping…

Comes Love: Sammy brings the Broadway to this recording of a number written for little-known 1939 musical Yokel Boy. With a great Jack Pleis arrangement, this cut has never appeared on a licensed CD, not even a compilation.

Perdido: The start of this Sammy scat tour-de-force tells you everything you need to know: ‘All right cats, let’s make it!’ With lots of brass, and nice trumpet and sax solos, this is a great album closer.

Don’t Get Around Much Anymore: Sy Oliver’s big band sounds at its best on this Duke Ellington classic, featuring a great trumpet solo (probably by lead trumpeter Ernie Royal).

The Gypsy In My Soul: Sammy and Morty Stevens had recorded this previously in 1953 for DDR (co-incidentally also released in 1957, on the album Sammy Jumps With Joya). Sammy obviously liked the tune enough to have another attempt, and he sounds like he’s having fun with the bongo-heavy arrangement Morty provides him.