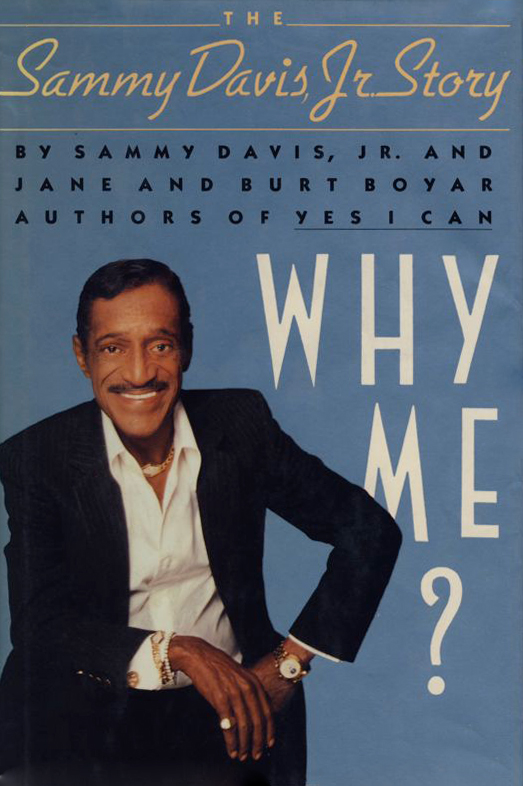 The phenomenal success of Sammy Davis, Jr.’s 1965 autobiography Yes I Can meant that whether Sammy would release a follow-up was more a question of ‘when’ rather than ‘if’. Sure enough, around 1987 Sammy decided the time was right, and engaged the only people he would trust with such a project: his Yes I Can co-authors Jane and Burt Boyar. Why Me? was born.

The Boyars had moved to Marbella, Spain, in 1970 and were still living there in 1987. Over the course of a year, the Boyars travelled and stayed in Sammy’s Beverley Hills home for extended trips of a month at a time, in order to conduct the interviews with Sammy and his friends. Sammy didn’t necessarily enjoy the process of looking back at the preceding 25 years, and according to Burt Boyar, Sammy was harder to pin down for interview sessions the second time around.

The title had a dual meaning for Sammy. He said: “I’d get up every morning and there would be another bomb threat or another death threat … and I’d look up at the heavens and go, ‘Why me?’ And then many years later, as wonderful things happened to me … I stopped drinking, and I finally found peace and happiness in my life and I continued to receive honors and accolades, again I would look to God and say, ‘I don’t deserve all this, Why me?’”

Generally speaking, Why Me? was written in the same style as Yes I Can: short on dates and detail, and with a novelistic quality. However, the book contains slightly more passages of introspection and self-analysis than its predecessor. Yes I Can’s narrative had finished in 1961, therefore this autobiography would cover Sammy’s involvement with Richard Nixon, his divorce from May Britt, his financial woes, and his self-destructive lifestyle during the 1970s. In Why Me?, Sammy takes many of the abundant opportunities presented for self-criticism, but does so without a hint of self-pity.

Rather than pick up where Yes I Can left off, the first third of Why Me? is actually a heavily abridged summary of Yes I Can, presumably to provide readers some context about Sammy’s early life, and the discrimination he faced on his path to success. Some small anecdotes were added, including the story of Sammy being uninvited to the John F. Kennedy Presidential Inaugural Gala in January 1961, which made news when the book was released.

From that point, the book covers some fascinating ground: Sammy’s time with Golden Boy, his activities in support of the civil rights, his campaigning for Robert Kennedy in 1968, his struggle to engage with the black power movement, his perspective on going to Vietnam in 1972, his marriage to and life with Altovise Gore, and his medical problems throughout the 1980s that helped change his lifestyle. Why Me? concludes with Sammy walking on stage at the start of the ‘Together Again Tour’ with Frank Sinatra and Dean Martin in March 1988. 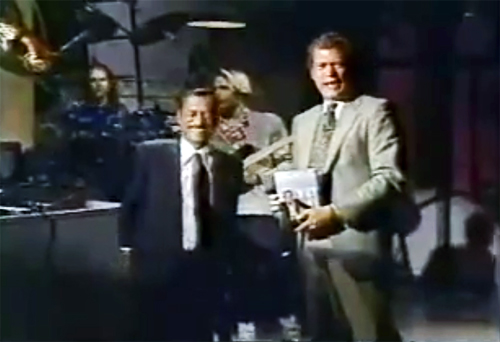 When Why Me? was published in May of 1989, some of the press coverage centred around the more salacious of Sammy’s confessions: his extended period of drug and alcohol abuse, his sexual exploits and fascination with pornography, his dalliance with Satanism. But some reviewers also highlighted the redemption story of Sammy working to break down the phoney persona he created for himself and the process of remaking himself in the 1980s as an elder statesman of the industry.

Karyn D. Collins wrote for The Asbury Park Press: “The entertainer who is known as much for his gold jewellery and ‘Mr. Showbiz’ personality as for his talent as an actor and sing, has come from behind the facade he created to talk about the real Sammy Davis, Jr. … Instead of beating his head against a brick wall and trying to persuade the whole world to like and accept him, [Davis] seems, in the finals chapters of his book, to have finally come to terms with who he is.”

Gary Deeb in the Hattiesburg American: “In sharp contrast to his 1960s and ’70s reputation as a supremely hedonistic person, this fresh bio is loaded with humility, uncluttered by showbiz hype and as earthbound as a book about a pop-culture icon can possibly be.” Ron Wynn in The Rapid City Journal wrote “Why Me? probably won’t erase the widely held perception of Sammy Davis, Jr. as an overly hip, insincere free spender whose time has passed. But it illuminates the life and experiences of a performer whose accomplishments and longevity should be an inspiration.”

Margo Jefferson in The New York Times was less kind: “Why Me? takes up Mr. Davis’s story after his marriage to Ms. Britt and tracks it, with chatty, confessional intensity, through his absentee fatherhood, his divorce, his remarriage and his chilling transformation from entertainment idol to show business gargoyle. It’s all here, all acknowledged, in a tone that moves cannily from finger-snapping aplomb to balladeering woe … his desperate, ubiquitous egotism is here too.”

Published only a year before Sammy’s death, Why Me? had nowhere near the cultural impact that Yes I Can had had – times had changed, and celebrity tell-alls were more prevalent than they had been in 1965. Despite this, the book met with some commercial success, and was soon found on bestseller lists across the country. Across both Yes I Can and Why Me?, Sammy Davis, Jr. and Jane and Burt Boyar certainly left us with a compelling account of an extraordinary American life. 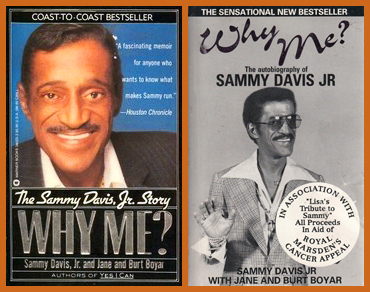