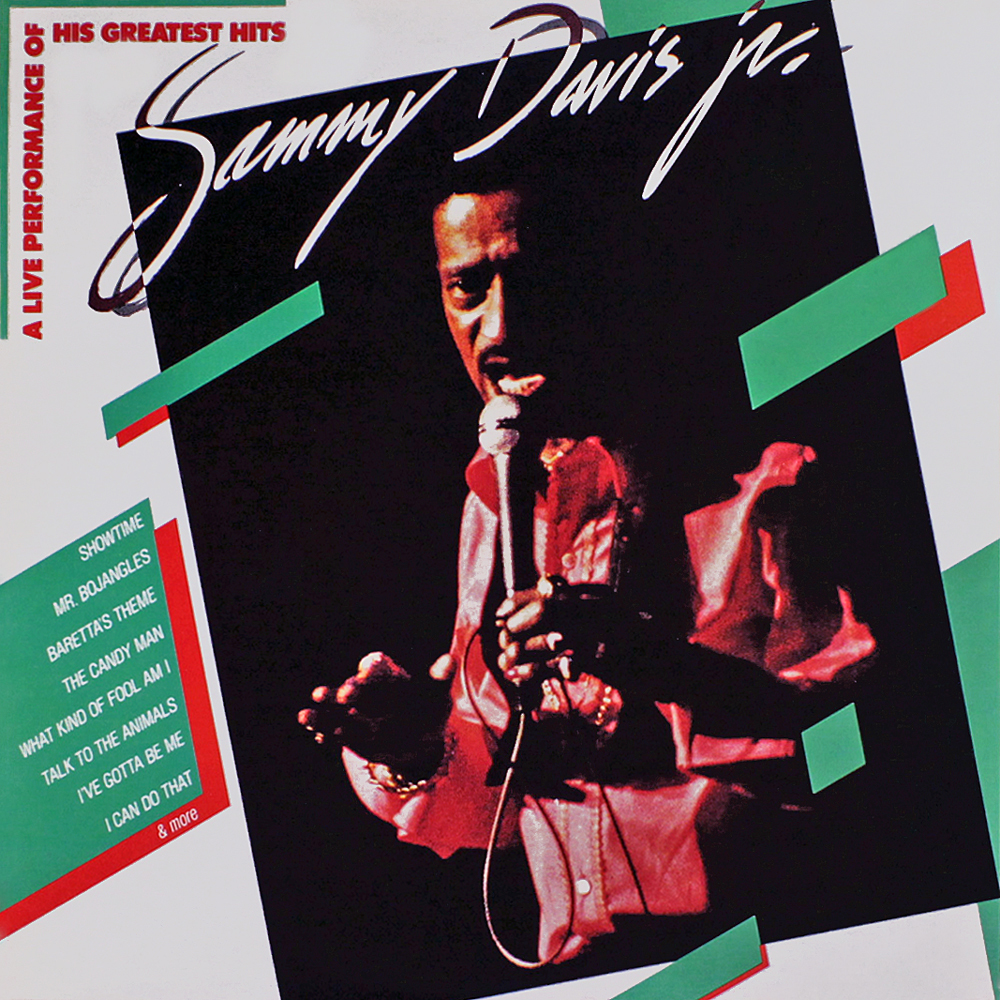 In the mid-1970s Sammy Davis, Jr. kept up a hefty touring schedule around the world, and one of his favourite places to visit was Australia. On Saturday 9th April 1977, he performed two shows at the Sydney Opera House which were captured by engineers from RCA records. The album, initially titled In Person: Australia ’77, was distributed by RCA in international markets such as Australia, Japan, Europe, and South Africa. But what about the United States?

At this point, Sammy’s recording contract with 20th Century had finished and he was producing his own material through a company called SYNI Corporation, set up in partnership with his manager Sy Marsh. For releases within the United States, Sammy had moved to join with Mike Curb’s new label, Warner/Curb. Sammy had first worked with Mike Curb at MGM Records in 1971, but Curb had continued to produce all of Sammy’s output even after they both left the label.

With the RCA live album from Australia, the decision was made to have Warner/Curb release the album domestically but package and market it as more of a ‘greatest hits’ compilation (with the added bonus of it being live), rather than market it as a reproduction of a live concert from the Sydney Opera House. This made some sense, because Sammy had sung in Sydney all of the tunes with which he was most identified: “I’ve Gotta Be Me”, “The Candy Man”, “What Kind Of Fool Am I”, “The Birth Of The Blues” and “Mr. Bojangles”. The album was retitled A Live Performance Of His Greatest Hits.

This meant some modifications would be made, as not all of the songs Sammy had sung on the original album were his hits. One of Sammy’s more popular recordings (if not, strictly speaking, a hit) was “Talk To The Animals” so this was added to the LP. Furthermore, Sammy had recently made two studio recordings for Warner/Curb: “I Can Do That” (from the smash hit musical A Chorus Line) and “Showtime (For Everyone)”. Arranged by Al Capps, this pair of songs was due to be released on a single, and so it made commercial sense to include them on the album somehow.

Accordingly, Curb engineers Humberto Gattica and Michael Lloyd took Sammy’s 1967 recording of “Talk To The Animals” from his Reprise album Sings The Complete “Dr. Dolittle”, plus the two Warner/Curb recordings, and inserted them into A Live Performance Of His Greatest Hits. This involved adding fake applause and echo (and in the case of “Showtime”, modifying the speed and length) to make all three songs appear to be live recordings.

Both to make space and to suit the new thematic positioning of the LP, several tracks from In Person: Australia ’77 were removed, including “I Can Do That” (Sammy’s live performance as opposed to the studio recording), “What I Did For Love”, “I’ve Got You Under My Skin” and the near nine-minute medley of songs sung in tribute to Frank Sinatra. The latter exclusion was particularly regrettable, as it had been one of the best cuts on the original album.

Released in the United States in October 1977, Billboard hailed A Live Performance Of His Greatest Hits as one of its ‘Recommended LPs’, saying “This LP is just what the title suggests. Recorded at the Sydney Opera House, the album reflects the excitement of a Davis performance…” Presumably the record-buying public Stateside didn’t share the same enthusiasm, as when Sammy repeated the experience of recording in Sydney two years later on another trip to Australia (resulting in a second live LP on RCA titled Hearin’ Is Believin’), there were no attempts made to release the album in the United States.

Showtime (For Everyone): Songwriters Joel Hirschhorn and Al Kasha were the hottest name in showbiz music in 1977, having just won two Academy Awards for Best Original Song, for The Poseidon Adventure in 1972 and The Towering Inferno in 1974. This song certainly wasn’t Oscar-bait, rather it was a ditty written for the sing-along soundtrack album of Disney’s TV show The New Mickey Mouse Club. Sammy’s version has almost the same degree of perk as The Mouseketeers deliver, with the relentless clapping and cheery background vocals.

I Write The Songs: It just wouldn’t be a Sammy Davis, Jr. live album if he wasn’t trying to put his own spin on a popular tune of the times. Hence we are presented with Sammy’s take on the Barry Manilow hit that had been Grammy-nominated for both Record of the Year and Song of the Year in 1976, winning in the latter category. With some very funky guitar and sax support, Sammy seems perfectly at home with the number, and it remained in his songbook for the next decade.