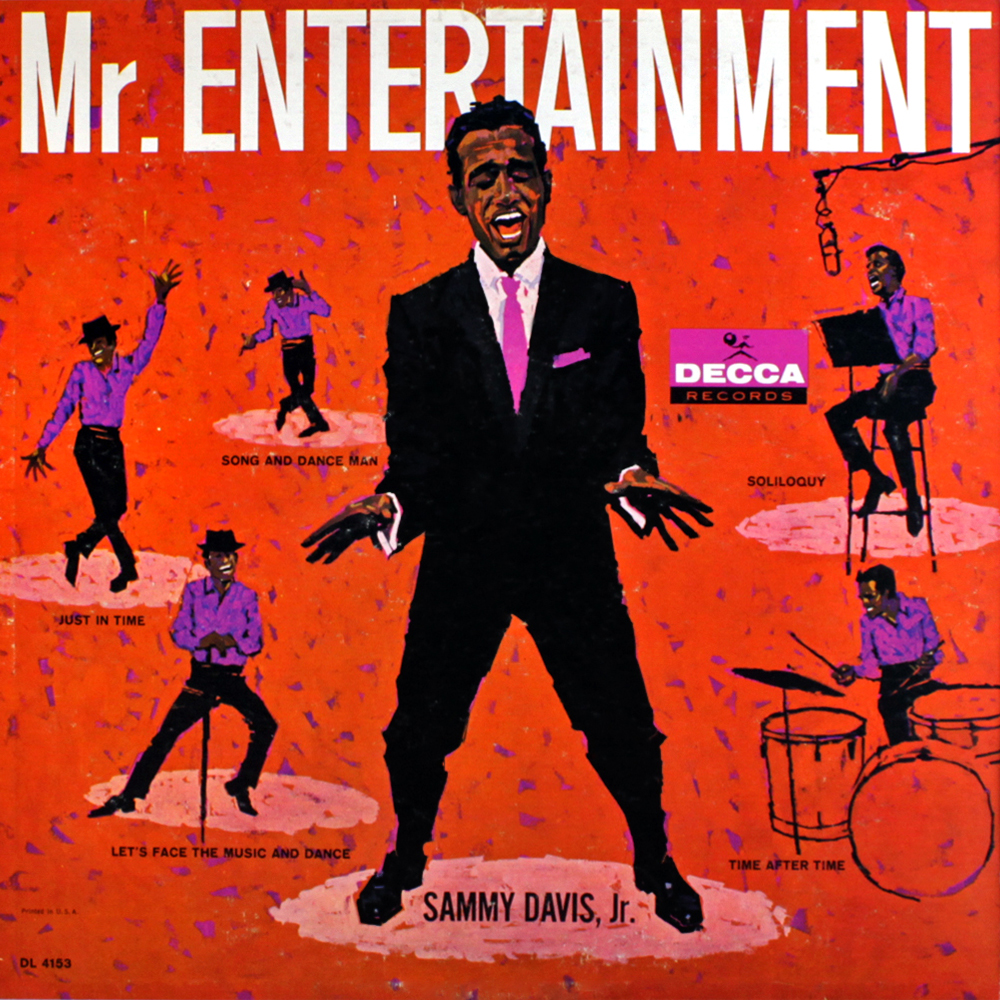 On 15th March, 1960, when Sammy Davis, Jr. recorded the four marquee tracks on Mr. Entertainment, the legendary ‘Summit at the Sands’ in Las Vegas had concluded a month earlier, he had just wrapped shooting the studio portion of major motion picture Ocean’s 11, and he had recently taken the new love of his life, Swedish actress May Britt, on a cruise to Mexico. He was on top of the world in every respect.

Sammy was also on top of his game in the recording studio, and it was time for a new challenge: record four of Broadway’s most notable dramatic songs. Much of the mainstream popular music of the day heralded from cinema or stage, but these tended to be generic love songs. Sammy would tackle character songs, rarely heard on LPs outside the context of cast recordings. As the arranger and conductor for the session Buddy Bregman described it: “Four showstoppers, the greatest ever done on Broadway”.

The four tracks would constitute the entire B side of Mr. Entertainment. First, the 10 minute epic “Soliloquy” from Carousel, in which carousel barker Billy Bigelow considers the consequences of impending fatherhood (Sinatra had recorded a version in 1946 and would record another in 1963). Sammy would perform it on TV, live in studio on The Sammy Davis, Jr. Show in 1966. Second, Cole Porter’s “Where Is The Life That Late I Led” from Kiss Me Kate, sung by the now-married Petruchio as he laments his lost bachelorhood.

Third, “Gesticulate” from Broadway operetta Kismet, featuring the plea for clemency by Hajj, a poet and storyteller, who has been sentenced to have his right hand cut off by the local Wazir of Police. Finally, the famous patter song “Ya Got Trouble” from The Music Man, where smooth-talking Harold Hill tries to convince the River City denizens of the evils of the local billiard hall.

The remaining seven titles on the album consisted of unissued recordings gathering dust from previous sessions dating back a couple of years. Three of these were from a session in December 1958 which was also arranged and conducted by Buddy Bregman, back when Sammy and he had been working on Porgy and Bess.

A further two were recorded for, but left off, It’s All Over But The Swingin’: “Traps and Taps” (a dance number in which Sammy is accompanied by Alvin Stoller on drums and bongos) and “Just In Time” (in which Sammy performs his full range of impressions of singers).

When added to the “Song And Dance Man” (an unsuccessful single released in 1958), the overall effect is to present on one vinyl record the full range of Sammy’s talents – mainstream pop, swing jazz, Broadway interpretation, tap, impressions: Mr. Entertainment indeed.

This album was a fitting way to conclude Sammy’s stint with Decca Records. Through 1960, Frank Sinatra was looking to purchase Verve Records, and when that deal fell through he decided to start his own label, Reprise Records. It surprised no-one that Sammy was his first signing; Sammy released his first album on Reprise even before Decca issued Mr. Entertainment.

Soliloquy: An unusual song for Broadway, not simply due to its length (at almost 10 minutes), but in that it requires the singer to sing solo (and occasionally speak) without the benefit of any accompanying choral group taking up the slack. Sammy turns in a particularly moving performance. All the emotion is earned; Sammy’s occasional penchant for overacting nowhere to be found.

Ya Got Trouble: Made famous by Robert Preston’s performance both in The Music Man’s original Broadway production, and subsequently in the 1962 film. A regular part of Sammy’s act at this point and for years to come was to perform a mime routine perfectly lip-syncing to the audio of Preston’s performance from the original 1957 cast album. Sammy would later update the bit with the film audio.

Let’s Face The Music And Dance: This is about as far from Fred Astaire and Ginger Rogers as you can get in 1960, with Buddy Bregman taking this uptempo arrangement south of the border for a Latin interlude. Olé!

How Are Things In Glocca Morra?: One of many great songs in 1947’s Finian’s Rainbow. Any recording that allows Sammy to break out a stereotypical Irish leprechaun accent qualifies as a ‘deep cut’.