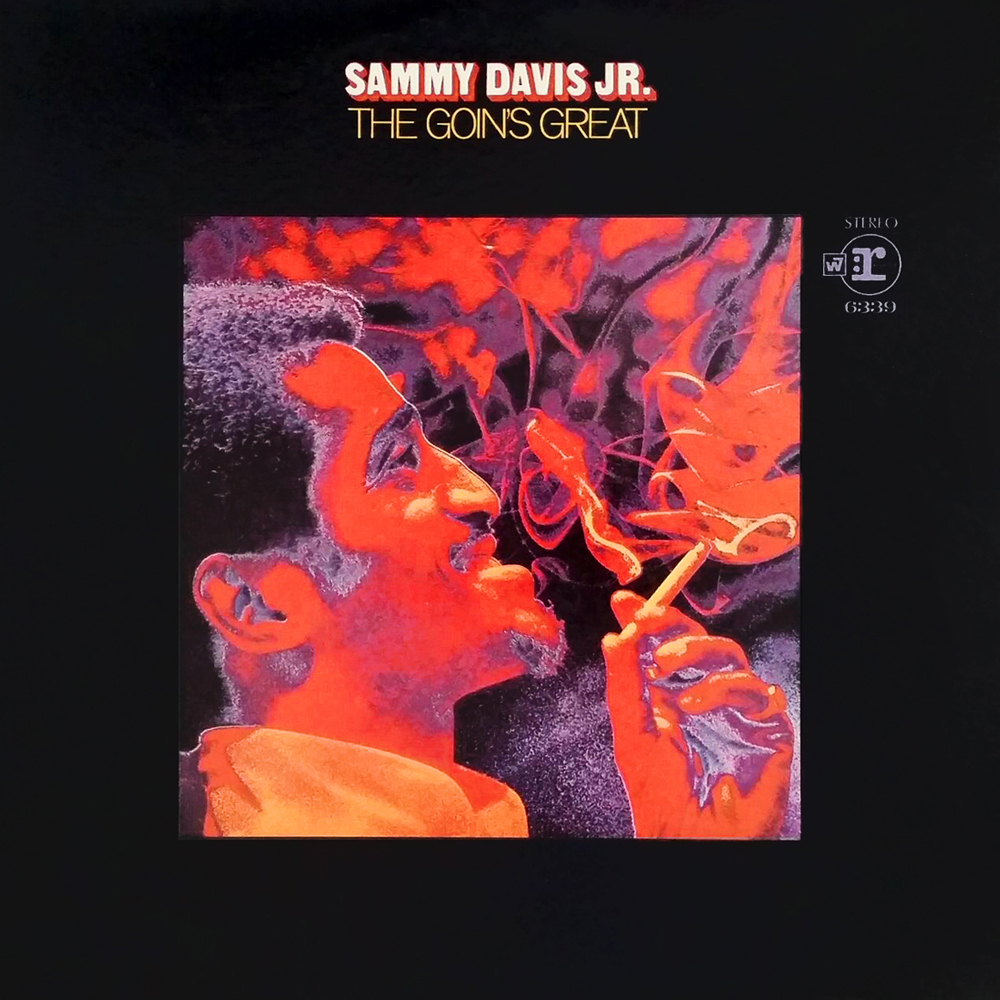 The changing popular culture of the late 1960s saw traditional pop singers of Sammy Davis, Jr.’s ilk struggle to find material that worked for them both artistically and commercially. Dean Martin had settled into a country-pop niche but recorded rarely, concentrating on his TV show, while Frank Sinatra tried both soft rock and concept albums (such as A Man Alone and Watertown). Sammy felt he should be recording more R&B/soul music, but he had difficulties making that work in the recording booth.

Sammy’s previous Reprise album I’ve Gotta Be Me had met with commercial success during 1969, despite its content being mostly show tunes and standards, so Reprise doubtless felt Sammy’s next album could continue to draw largely from a similar wellspring, with a sprinkling of more funky and rock-tinged numbers thrown in. An exception would be the title track, which instead had its genesis from somewhere completely different: an advertising campaign.

In late 1967, composer Stan Applebaum was engaged by Pan American Airways to make something of a slogan developed by ad executive Wilson Seibert, Jr: “Pan Am makes the going great”. The jingle Applebaum wrote was the centrepiece of Pan Am’s 1968 ad campaign and quickly became iconic (even forming the basis of a three-part ballet – a futuristic fantasy on airport procedures – staged by famed choreographer George Balanchine and the New York City Ballet in 1971). The jingle was later developed further and honorary ‘Rat Pack’ lyricist Sammy Cahn was asked to put words to the music: “The Goin’s Great” was born. Pan Am subsequently used Sammy’s recording in its marketing materials.

Sammy recorded “The Goin’s Great” and two further sides with I’ve Gotta Be Me’s principal arranger Richard Wess, and an additional three sides in a session arranged by Sammy’s own musical director George Rhodes. Three of these six recordings originated – typical for Sammy – from the Broadway stage: “I Have Dreamed” from The King And I (which Rhodes gives an unusual swinging arrangement), “The Impossible Dream” from Man of La Mancha (which sees Sammy deliver an impassioned reading befitting the famous showstopper) and “What Became Of Me?” from the West End production of Sammy’s own musical Golden Boy.

Reprise also included some sides they had once hoped would have more commercial appeal. “I Have But One Life To Live”, “Break My Mind” and “Bein’ Natural Bein’ Me” had all already been released as singles, to little acclaim. Ironically for the latter recording, Sammy didn’t always sound entirely convincing with the hipper, more happening arrangements. Nonetheless, The Goin’s Great remains a rewarding listen and a time capsule of how Sammy attempted to insert more soul into his sound.

In the original LP’s liner notes, arranger Ernie Freeman is quoted as saying the session at which “I Have But One Life To Live” was recorded was “one of the most exciting dates I was ever associated with … three tunes in 45 minutes. Boom, boom, boom! It was done and it was perfect”. The great fast-paced drum break at the beginning heralds Sammy giving his absolute all on a number for which the lyrics had more than a little autobiographical relevance. Sadly for us, one of the other two songs recorded at the session, “All This World And The Seven Seas”, remains unissued.

The recordings made for The Goin’s Great – billed as being accompanied by The Jimmy Bowen Orchestra and Chorus – were the last recordings Sammy made for Reprise that were released on the label. The ultra-psychedelic album cover certainly fit the zeitgeist, and gives some indication of the nature of the times in which Sammy made his decision to leave the label he’d been with for almost a decade.

This Guy’s In Love With You: One of Sammy’s best ever recordings, with a Ray Brown bass intro and Sammy in an effervescent finger-snapping mood, what more could you ask for? Having fallen in love with Burt Bacharach and Hal David’s tune while in London in Golden Boy, Sammy had George Rhodes write an arrangement which he famously performed live on the BBC show Dee Time in September 1968. As soon as he returned to the States in October, he recorded the song in the studio, but for some reason it didn’t meet his standards and the recording wasn’t released (until 2004). He tried it again in March 1969 and liked the result better; the second effort is what is on The Goin’s Great.

In This Crowded World: Sammy is in outstanding voice on this little-known but exceptional cut, for which Richard Wess provides an uptempo bossa nova beat. The beautiful melody and clever lyrics are the work of Mel Mandel and Norman Sachs, a writing team responsible for the musicals After You, Mr. Hyde in 1968, My Old Friends in 1979, and an abortive attempt to bring Marvel’s Captain America to the Broadway stage in the 1980s. Surely one of the few songs in popular music history to namedrop author O. Henry, who died in 1910 and was known for his short stories with surprising endings.

What Became of Me?​​: When Producer Hillard Elkins agreed to halt the run of Golden Boy on Broadway in 1966, he did so on the proviso that Sammy would later headline a run of the show in London’s West End. The new production opened in June 1968 and the original songwriters Charles Strouse and Lee Adams wrote a brand new song to dramatically close the show: “What Became Of Me?” Sammy performs the song with a mix of both introspection and gusto – one can just imagine Londoners departing the Palladium having had their socks blown off.

Break My Mind: Originally intended by songwriter John D. Loudermilk as a song for the Allman Brothers Band, it was a hit for George Hamilton IV in 1967 and was quickly covered by just about everyone in the rock and country world. Recorded in March of 1968, this was the first song arranged for Sammy by Mike Post, who was otherwise busy creating hits with Sammy’s Reprise stablemates The First Edition. Post would bring a taste of country/rock to this recording, which Sammy seems to dig. Oddly, either Post or Sammy decided to change the song’s lyrics from ‘a babbling fool behind’ to ‘a lovesick fool behind’.