YouTube Tues: Live and unrehearsed on “Dee Time” in 1968

While this clip won’t be new to most Sammy fans, is this the coolest video clip on the internet, or what?

This is Sammy Davis, Jr. in 1968 appearing on the UK talk show Dee Time, which was hosted by Simon Dee. Dee, whose real name was Cyril Nicholas Henty-Dodd, enjoyed a meteoric rise from being a disc jockey on a pirate radio station in 1964 to becoming host of Dee Time, a hugely popular television talkshow on BBC in 1967. The show was unscripted and live; the British public hadn’t seen anything like it and Dee quickly became a superstar.

Liz Hurley would later claim Dee was partial inspiration for the character Austin Powers: wearing cravats, talking groovy, and with a lifestyle that was all sex, drugs and rock ’n’ roll, he was the embodiment of the swinging sixties. The closing credits of Dee Time featured Simon speeding off in a Jaguar E-Type with a blonde model rapturously in tow. While loyal to his staff, in many ways Dee was as unpredictable and demanding a performer as Sammy himself was in late 1968. Sadly, for Dee these traits would see his celebrity wane about as quickly as it had waxed.

Sammy Davis, Jr., meanwhile had just finished a 14 week run of musical Golden Boy at the London Palladium, was living large from his penthouse suite on top of London’s Playboy Club, and was about to head to West Germany for a week of live performances. The producer/director of Dee Time, Roger Ordish, booked Sammy for his show on Saturday 21 September 1968, but feared he mightn’t turn up. Sure enough, when the show went live to air, Sammy was nowhere to be found. Mid-show, however, Ordish got word in the control booth that Sammy Davis, Jr. was somewhere in the building. His musical director Max Harris rushed in and told him that Sammy was distributing sheet music to the musicians. According to Louis Barfe’s book Turned Out Nice Again: The Story of British Light Entertainment, Ordish recalls:

“I said ‘Well, that’s great.’ He said ‘Well, the trouble is, his arrangement includes fourteen strings and we have’t got any strings, as you know’. That [sight-reading ability] showed you the absolute brilliance of the British musicians at that time … they somehow botched this thing up for Sammy Davis, Jr. to sing. The lighting guy said ‘Where’s he going to stand?’ He was just turning every light on.”

The music Sammy was handing out was for “This Guy’s In Love With You”, a song by Burt Bacharach and Hal David. Herb Alpert had first sung it on a TV special The Beat of the Brass in April 1968, then quickly recorded in the studio. By June, it was a #1 hit on the Billboard Hot 100. Having fallen in love with it, and, excited by George Rhodes’ arrangement, Sammy recorded the song in the studio as soon as he returned to America in October. For some reason it didn’t meet his standards and the recording wasn’t released (until 2004). He tried it again in March 1969 and liked the result better; the second effort was included on his LP The Goin’s Great.

According to Ordish, BBC actually pulled the plug on the broadcast after Sammy’s first verse, because the show was going long! So how this great quality clip has survived I’ve no idea. But happily, we get to enjoy what 15 million BBC viewers were denied: this live, unrehearsed performance of Sammy’s on Dee Time is just … magic! 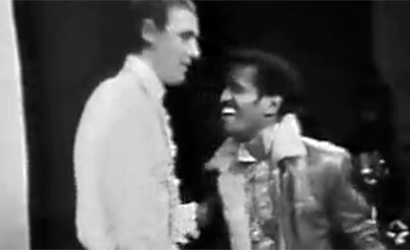 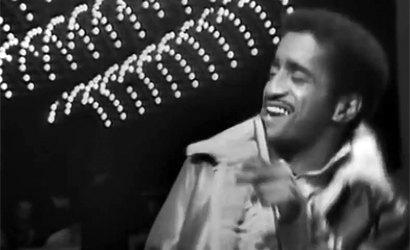