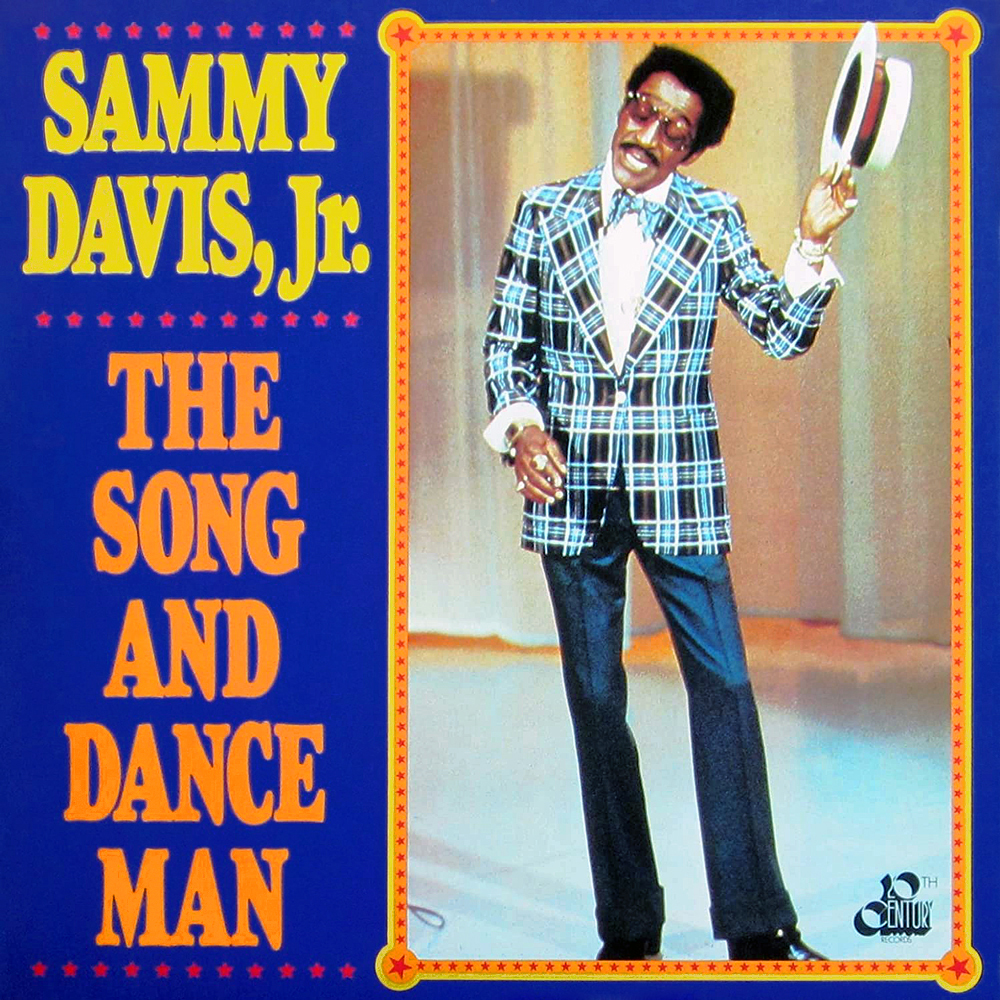 In the Billboard magazine edition of 30th November 1974, it was announced that Sammy Davis, Jr. had left MGM Records and signed for 20th Century Records. But this was no splashy media fuss, as Sammy’s previous signings had been, more a footnote buried on page 20. It was a difficult time for singers like Sammy on record. The same month Warner Records’ President Joel Smith told Billboard: “The record-buying audience is not buying that kind of legitimate pop singer. Each generation wants its own heroes … the people who love them in Las Vegas don’t buy records.”

Furthermore it was a difficult period for Sammy personally as well as professionally. Struggling to maintain his status in the entertainment world, he found refuge in alcohol and drugs and became an occasionally unstable performer. Outside of his demanding touring schedule, his focus shifted away from vinyl and toward television – he debuted a new syndicated talk/variety show hybrid titled Sammy & Company in April 1975.

Given the various factors at play, Sammy released only a handful of singles in the United States over the next two years, although all of them charted on Billboard’s Adult Contemporary (AC) chart in the US (at the time called the ‘Easy Listening’ chart).

One thing Sammy did in 1975 was lay down vocals to the instrumental theme to the television show Baretta for the show’s second season, which began in September. The theme, titled “Keep Your Eye On The Sparrow” was written and arranged by Dave Grusin and quickly became considered one of the best TV themes of the era. Singing the theme to a hit TV show was a first for Sammy, although he had a bit of a history of recording covers of TV themes. He had recorded the theme to My Mother The Car for Reprise and the theme to The Mary Tyler-Moore Show for MGM. In fact the theme song to Chico And The Man was the last thing Sammy recorded for MGM Records (he took it with him to 20th Century).

Inspired by his involvement with Baretta, Sammy stepped into the studio at the beginning of 1976 and cut a new recording of “Keep Your Eye On The Sparrow”, arranged and conducted specially by Dave Grusin himself. Released in the USA in March 1976, the single made it to #47 on the Billboard AC chart. But elsewhere in Europe, the song was an unexpected smash hit! In the spring of 1976, Sammy’s recording of the Baretta theme went to #1 in The Netherlands, Sweden and Belgium and was certified Gold. Perhaps there was a market there for an LP? The Song And Dance Man was born.

Sammy revisited the studio and recorded some more TV tunes. This included a new disco version of “Love Is All Around” (the theme to The Mary Tyler-Moore Show), two themes that had been instrumental on the actual shows but were now given brand new lyrics (Kojak and Hawaii Five-O), and an original piece that was written in tribute to the soap Mary Hartman, Mary Hartman, but was not based on the actual theme music to that show. The resulting LP, The Song And Dance Man, was released by 20th Century into foreign markets including Europe, Canada, Argentina and Australia but, it appears, not in the USA. Six of the ten inclusions were TV themes.

The remaining four cuts on The Song And Dance Man, all placed on Side 2, were a mish-mash of recordings taken from various places. Sammy had brought the country-styled cover “A Legend In My Time” with him from MGM. Previously released, it had been a semi-successful single way back in May 1973, rising to #29 on the Billboard AC chart. Two more country-styled covers, “Song And Dance Man” and “Snap Your Fingers”, both produced by Jim Vinneau, had been released on a single in September 1975 and had also made the AC chart, rising to #32. “I Heard A Song” was a patriotic tribute to great figures of then-recent American history. It had been recorded for a special double LP featuring multiple artists titled Happy Birthday U.S.A., which was released during 1976 to celebrate the United States’ bicentenary.

Sammy was always proud of his popularity in Europe, and he remains popular in the U.K., France and particularly Germany, even as his star has – alas – faded somewhat in popular culture memory in the United States. In 1977, 20th Century would release another LP, this time in The Netherlands only, including almost all of the TV themes on The Song And Dance Man, plus a few new ones, titled Sammy Davis, Jr. Sings The Great TV-Tunes.

Keep Your Eye On The Sparrow: Sammy’s famous TV theme, with the cockatoo intro and funky melody. The original composer Dave Grusin supervised this full recording of the classic. The lyrics were mostly written by Morgan Ames, a good friend of Baretta’s star Robert Blake. When initially recorded for the show, singer Jim Gilstrap recorded the vocals but the studio baulked. According to Ames the message was “You can’t open a ‘white’ show with a black singer”. The vocals were removed and a wobbly electric guitar added to make Season 1’s opening instrumental only. When the show was a hit, Blake insisted Ames’ lyrics be put back into the theme for Season 2. Sammy was called in to lay down the vocals and the result is widely regarded to be one of the top themes in TV history. (Sammy would team up again with Robert Blake in 1985, singing the theme to his short-lived series Hell Town. Alas, neither the theme nor the show itself were in Baretta’s league.)

You Can Count On Me: Another classic theme. The opening to Hawaii Five-O, with its unmistakeable drum intro, was written by Morty Stevens, who had been Sammy’s personal arranger and conductor for many years in the 1950s. Stevens had become the musical director for CBS on the west coast, and doubtless enjoyed hearing Sammy sing his tune. Lyrics had been written by Hermine Hilton, and lovers of the original show are constantly surprised to uncover this morsel of TV kitsch. Released as a single in Europe only, it rocketed up the charts to #17 in Belgium and #23 in Holland in the autumn of 1976.

Chico And The Man​: Sammy brought a couple of recordings with him from MGM to 20th Century, and one of those was released as his first single on the new label in December 1974. Arranged by Don Costa, it was the theme song to the hottest new sitcom on TV, Chico And The Man. Sammy had befriended the show’s young star Freddie Prinze since Prinze’s debut on The Tonight Show on 6th December 1973, an episode on which Sammy was also a guest. “Dynamite, dynamite!” Sammy enthused on air after Prinze’s standup act got an unusually lengthy ovation. When Chico And The Man premiered in September 1974, Sammy arranged a guest spot, appearing as himself in an episode broadcast the next February. Off the back of Sammy’s appearance, the new single didn’t do too badly either, climbing to #24 on the Billboard Adult Contemporary chart in March 1975.

Mary Hartman: Written by Wally Holmes, this piece is not the theme to Norman Lear’s satirical soap opera Mary Hartman, Mary Hartman. The original theme was by British composer Robert Charles Kingston, titled “Premiere Occasion”, and was selected from a stock music library. Instead, this is a part-soul, part disco celebration of the character Mary Hartman. Sammy loved his soaps, and would go on to appear on Love of Life, One Life To Live and General Hospital.