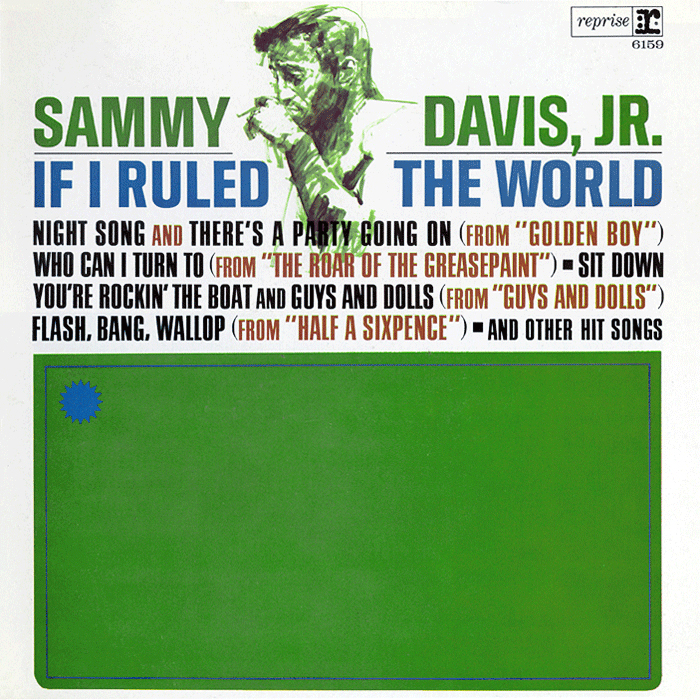 In March 1965, Sammy Davis, Jr. was five months into his starring role on Broadway in Golden Boy, so it makes perfect sense that Reprise would try to capitalise on this by releasing an LP featuring material predominantly sourced from musicals. The musical theatre was a constant source of inspiration for Sammy and the genre matched his singing skill set perfectly: he was part song interpreter, part song performer.

With Sammy busy on stage, the LP was clearly cobbled together in a somewhat opportunistic fashion (not to mention the fact it was given the most uninspiring cover sleeve design in music history). Only one song (“Who Can I Turn To”) had been recently recorded, the others dated from April 1964 or earlier. Six of the 11 selections had already been released either on EP or on previous LPs.

Of the five new recordings, three were from Golden Boy. Knowing that the cast album for the show would be released on Capitol Records, Sammy recorded three of the best tunes from the show for his own label, Reprise, just before rehearsals started (his recording of the musical’s establishing song “Night Song” is exceptional). However, once rehearsals and tryouts began, the show underwent massive changes and the other two songs (“Yes I Can” and “There’s a Party Going On”) were removed entirely, making their inclusion here as representatives of the musical somewhat awkward. (Both were later added back in for the 1968 run of Golden Boy on London’s West End.)

A further new recording was “Tracey”, a beautiful piece written by Broadway doyen Jule Styne specifically for Sammy upon the birth of his daughter, Tracey. It was to Sammy what “Nancy (With the Laughing Face)” was to Frank Sinatra – although little did Frank know at the time that that particular song hadn’t actually been written originally for Nancy at all…

The final new recording was “Who Can I Turn To” (from the British musical The Roar of the Greasepaint – The Smell of the Crowd). Both it and the LP’s title track “If I Ruled The World” (from British musical Pickwick) were written by Sammy’s favourite composer, Englishman Leslie Bricusse. Sammy loved recording his songs, and had previously been responsible for introducing Bricusse’s work to the USA audience. However, this time around, Tony Bennett beat Sammy to the punch and his recordings of both these songs made the Top 40 (and Top 10 Adult Contemporary) before Sammy’s otherwise outstanding versions could get into stores.

There is a very strong British flavour to this album; of the six songs that had already been released, four were of British origin and had already appeared on Extended Play 45s released in the UK. “If I Ruled The World” and “Flash, Bang, Wallop” (from Half A Sixpence) were on a 1963 UK release called British Showcase. “Another Spring” and “Ten Out of Ten” were also both written by Leslie Bricusse, and were arranged and conducted by Englishman Peter Knight. They had appeared on a special British-only EP and had also been included on the UK release of The Shelter of Your Arms.

The final two were numbers from Frank Loesser’s Guys and Dolls: Sammy’s Marty Paich-backed recording of its title track had already been included in the US release of The Shelter of Your Arms, and his rollicking rendition of “Sit Down, You’re Rockin’ The Boat” had been included on the Reprise Musical Repertory Theatre collection (a series featuring the scores of four popular Broadway musicals of the time, sung by artists in the Reprise Records stable).

Despite the patchwork of different recording dates, different arrangers, and different origins, the variety actually proves to be the spice of life. Alas, the album somewhat overshadowed by Sammy’s duet album with Count Basie on Verve Records which was released the same month.

Yes I Can!: What a way to close the album: no-one else could make songs of self-affirmation avoid insincerity quite like Sammy. Although it was ultimately ditched from Golden Boy in preparation for its Broadway run, the song stuck with Sammy and become something of his own personal mantra – he utilised it as the title for his ground-breaking autobiography which was published six months after this album was released.

Who Can I Turn To (When Nobody Needs Me): Tony Bennett had the hit with this touching Act I closer from The Roar of the Greasepaint – The Smell of the Crowd. In the end, Reprise never even released Sammy’s recording as a single, possibly due to the dire state of Sammy’s voice (Golden Boy had taken a significant toll on it). Mere hoarseness was never going to stop Sammy recording a song written by his pals Leslie Bricusse and Anthony Newley, however, and we should be glad it didn’t. Sammy’s raspiness and the slight struggle to hit the appropriate notes simply adds to the vulnerability he brings to the recording.

Flash, Bang, Wallop!: Introduced on stage in 1963’s Half A Sixpence by Britain’s first teen idol and rock and roll star, Tommy Steele, this number allows Sammy to let his hair down and have a bit of fun. He gets to break out his favourite British accent, while arranger Marty Paich gets to break out some weird percussion! Not exactly a song title that has seen a lot of cover versions through the years…

Ten Out Of Ten​: Another Leslie Bricusse tune, but this one isn’t from a musical. The BBC arranged for six of Britain’s best songwriters to compete against each other in writing Britain’s entry into the 1964 Eurovision Song contest. All six songs would be performed by Matt Monro on a TV special and released on EP, with the voting public selecting Britain’s entry. Sammy also recorded “Choose”, written by Lionel Bart for the same contest. Neither won – that honour went to Tony Hatch’s “I Love The Little Things”, which finished second in the actual competition.