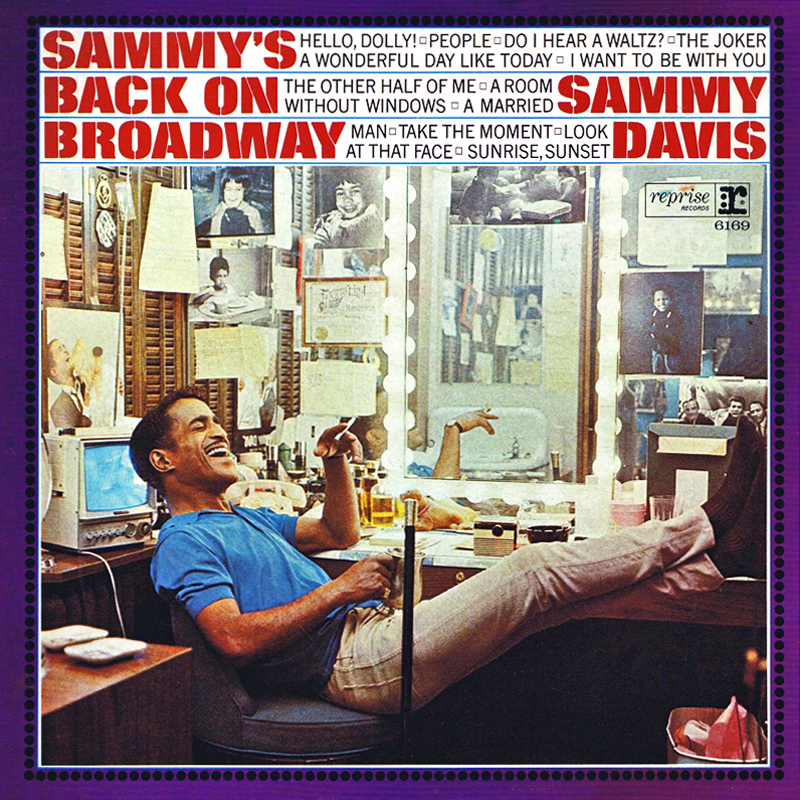 In his liner notes for the 1996 compilation CD I’ve Gotta Be Me: The Best of Sammy Davis, Jr. On Reprise, author Will Friedwald writes about the 1960s: “This was the last time in which the great Broadway musicals had a pipeline into the pop music mainstream, and, for many shows, Sammy Davis, Jr. was the conduit. Davis found himself perfectly positioned to take advantage of every positive trend of the era – he was Vegas, he was 42nd Street, he was soul and he was schmaltz.” These aspects are each well and truly on display in Sammy’s Back On Broadway!

Sammy Davis, Jr. was indeed back on Broadway: from October 1964 for 18 months he starred as the lead in Golden Boy at the Majestic Theatre. Released in August of 1965, Sammy’s Back On Broadway was the latest in a long line of Sammy’s albums to primarily source its material from the musical theatre, and is one of his best. It was also the last to feature show tunes exclusively.

For this album, Sammy selected what was hot on Broadway, singing some of the best songs from Hello Dolly!, Funny Girl and Fiddler On The Roof. Also included are two songs from Richard Rodgers and Stephen Sondheim’s collaboration Do I Hear A Waltz? and three from Sammy’s favourite Brits Leslie Bricusse and Anthony Newley’s latest work, The Roar Of The Greasepaint – The Smell Of The Crowd. Sammy had already recorded one number from that score (“Who Can I Turn To?”) and would record another three songs in future … basically half the entire score!

Come the end of March 1965, Sammy had not recorded for Reprise since early October of the previous year, and those six months represent the longest stretch away from the microphone since Sammy started with Reprise in 1961. The reason was largely medical: Sammy’s voice. In preparation for Golden Boy, Sammy had suffered from severe hoarseness, and most likely developed vocal nodules. Although Sammy felt right to return to the studio in April, his voice was variable at best – on some tracks he is OK, but he struggles through “People”, and grunts, groans and growls his way through “Hello, Dolly!” (where, happily, the arrangement suits this approach). 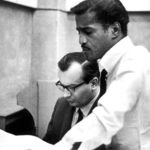 On the whole, the album’s arrangements elevate the already exceptional material. They were the work of classically-trained composer Claus Ogerman, who had caught Sammy’s attention while working at Verve Records arranging albums for the likes of Antônio Carlos Jobim and Stan Getz. Ogerman arranged quite a bit of material for Sammy throughout 1965, and he clearly impressed the Reprise bigwigs enough to score the arranging duties for 1967’s Francis Albert Sinatra & Antônio Carlos Jobim. In several places, Ogerman delivers the sounds of the swingin’ 60s: “A Room Without Windows” channels Quincy Jones’ “Soul Bossa Nova” and wouldn’t have been out of place on an Austin Powers soundtrack!

Sammy was particularly enamoured of the arrangements Ogerman delivered. He was quoted in the album’s original liner notes (by George T. Simon) as saying: “[Claus] approached many of them totally unlike the way the Broadway productions did them … and it worked.” He was particularly proud of the reaction to the test sides: “One of the biggest thrills of my life was getting a wire from Richard Rodgers saying how much he liked the way we’d done his ‘Do I Hear A Waltz?’ and ‘Take The Moment’.” High praise from a man known to be particularly picky with performers’ interpretation of his songs.

High praise is what the album deserves in total: Ogerman provided Sammy with a fresh and different sound to work with, and Sammy took the baton and ran with it. In Sammy’s own words: “The idea of doing songs from Broadway shows has always been something sort of very marvellous for me, because show tunes represent about ninety percent of the music I really like.” With results like Sammy’s Back On Broadway, who could argue with the man?

Sunrise, Sunset: A sublime performance of the famous wedding song from Fiddler On The Roof. Ogerman provides the hypnotic melody with excellent string backing and Sammy supplies the perfect reading: sentimental but not saccharine. Sammy explains the song’s finish: “Claus said to me, ‘Give it a bit of your own people’s feeling.’ That’s when I did the Hebraic bit.”

I Want To Be With You: The big love duet from Sammy’s own Golden Boy (between interracial lovers Joe and Lorna) is here reimagined into a superior solo ballad. Fortunately, Sammy’s voice is better here than on the rest of the album. Ogerman brilliantly employs some light latin rhythms – after all, Sammy’s love of bossa nova is what got Ogerman hired in the first place. Compare with “Change Partners” from Francis Albert Sinatra & Antônio Carlos Jobim.

The Joker: Another swingin’ 60s classic, with a rambunctious piano intro and punctuating brass. Sammy returned over and over to the ‘clown’ motif in song across his career and he does so again to great effect in this number from The Roar Of The Greasepaint – The Smell Of The Crowd. The show’s producer David Merrick hated this song and tried to get it dropped from the show, even going so far as to remove the sheet music from the orchestra pit. Co-writer, director and star Anthony Newley fought that battle and won the war! (Favourite non-Sammy cover: Gina Riley in the opening credits to Australian sitcom Kath & Kim.)

The Other Half Of Me: From the short-lived 1964 musical I Had A Ball starring Sammy’s comedian friend Buddy Hackett. It was (another!) Coney Island love story – which explains Ogerman’s otherwise odd choice of a barrel organ break two-thirds of the way through. In a tunnel-of-love sequence, the show featured a range of one-night celebrity cameos from Hackett’s friends such as Joey Bishop, Steve Lawrence and even Sammy himself when Golden Boy was off. This song is a high point in the score and Sammy sings it straight as a ballad. (Favourite non-Sammy cover: Andy Bey on Chillin’ with Andy Bey.)