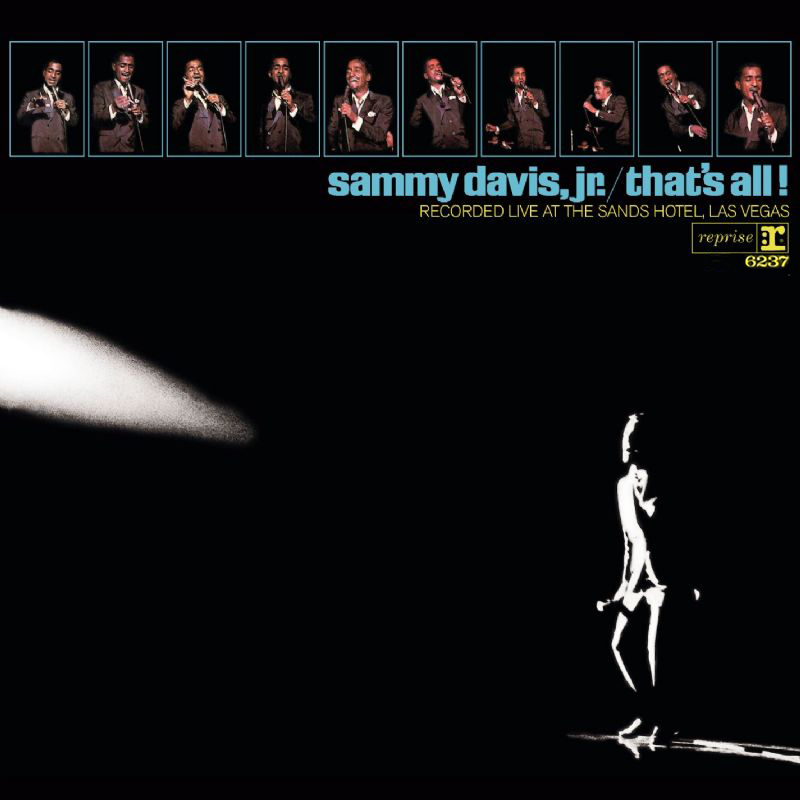 That’s All! – a live recording of Sammy on stage in Las Vegas, doing it all – is proof positive that understatement was among Sammy’s myriad talents.

There were times, however, when Sammy considered himself a frustrated singer. He told record producer Ken Barnes in 1967: “When people come to my show, they expect a whole lot of other things – dancing, clowning, impressions, playing drums, all that stuff. Now, you take Frank. He can get up and sing twenty-five songs and be accepted just for that. But I can’t, because they don’t accept me in the same way. So I’m a frustrated singer.”

Sure enough, in January of 1966 Frank Sinatra recorded his first ever live album, Sinatra At The Sands, and it consisted of 17 songs and a monologue. Four months later, Sammy Davis, Jr. was in the same place, The Copa Room at The Sands Hotel, for the same purpose, but the resulting double-LP record would contain evidence of the full gamut of the Sammy Davis, Jr. experience: not just singing but impressions, comedy, and a full-on jam session.

Having finished in Golden Boy on Broadway in March and having taped the final episode of The Sammy Davis, Jr. Show in New York in April, Sammy made a bee-line for Las Vegas, where he had not headlined for two years. Reprise Records producer Jimmy Bowen and engineer Eddie Brackett recorded six shows during the engagement, starting on the Memorial Day long weekend. Explaining why he doesn’t want to leave the stage, at one point Sammy jokes: “I don’t like my room. Oh, I’m not staying here at The Sands, I’m at The Castaways. Couldn’t get a room on the weekend, you know how it is. Big holiday weekend, couldn’t get one…”

Sammy displays a supreme comfort with his audience – inserting quips and humorous patter liberally throughout the set (and sometimes in the middle of numbers). He delivers a ten minute routine about Las Vegas with the confidence of a seasoned stand-up comedian. Sammy incorporates plenty of racial humour – ever so gently subversive, but nothing that would alienate his largely white audience – and some material that is politically incorrect to a modern ear (“That’s all I need, is to be a coloured Jewish feygele!”).

“One For My Baby (And One More For The Road)” is the vehicle Sammy uses for his impressions, beginning with his take on Fred Astaire’s physical and vocal mannerisms, before taking the mickey out of Frank Sinatra – who is seated in the audience (Reprise was, after all, Frank’s label so it was not surprising to see him overseeing this landmark live taping first-hand). Sammy then continues to his usual set of impressions: Humphrey Bogart (“So … stick ‘em up, Joe”), Jimmy Cagney, Jimmy Stewart, Cary Grant, W.C. Fields, Marlon Brando, Dean Martin, and Jerry Lewis.

This was Sammy’s third live LP; its predecessor was 1963’s At The Cocoanut Grove. The latter has slightly better sound – occasionally That’s All! suffers from some clipping and/or mic distortion – and Sammy’s voice dates from before he did untold damage to it in Golden Boy. Unlike At The Cocoanut Grove however, That’s All! features quite a lot of Sammy singing in its 93 minutes run time. New additions to Sammy’s repertoire include two songs he never recorded in-studio, both of which later became identified with Barbra Streisand: “On a Clear Day (You Can See Forever)” and “Any Place I Hang My Hat Is Home”.

The conclusion of the album features Sammy playing the vibraphone in a jam session with drummer Buddy Rich, who was in the audience and whom Sammy calls up onto stage. Rich was in town with his fledgling big band, which was opening at The Aladdin Hotel down the strip (a week later, Sammy and Buddy would combine forces during a ‘midnight matinée’ performance to record The Sounds of ’66). The joy of hearing the two legends playing together (following a barnstorming Rich solo) and trying to one-up each other at the end is worth the price of the album alone.

In the conclusion of his biography of Sammy Davis, Jr. Gonna Do Great Things, Gary Fishgall writes “Audiences were awed by the fact that this slight, diminutive guy could dance, sing, do impressions, tell jokes, and play musical instruments. No entertainer before or since had ever displayed such amazing diversity… The problem is that one had to see him do all of these thing in order to understand what made him such a phenomenon … to fully appreciate his breadth, depth and intensity, one had to spend an hour or two with him – live.”

In the end, Sammy got his wish – his epitaph at Forest Lawn Memorial Park in Glendale, California, reads: THE ENTERTAINER – He Did It All. Alongside At The Cocoanut Grove, this double-LP extravaganza is the closest we can get to experiencing the live Sammy spectacle, wherein the whole was greater than the sum of its parts.

Broadway Medley: A stirring collection of seven songs, six of which originate from Broadway and all of which were in some way closely associated with Sammy. “Lonesome Road” and “Hey There” were the first two songs on Sammy’s first album for Decca Records; “Something’s Gotta Give” was at that point his most successful single (reaching #9 on the Billboard charts); he had introduced “Gonna Build A Mountain” from Stop The World – I Want To Get Off to the USA; “Too Close For Comfort” was from his first musical Mr. Wonderful; and “Yes I Can” and “I Want To Be With You” had both been written for Golden Boy. Sammy puts his heart into the latter – you could hear a pin drop in the audience – such that at its conclusion he interrupts the medley to joke that the tape machine better not be malfunctioning again, which draws a loud laugh from Sinatra in the audience!

What Kind Of Fool Am I: “We gotta do it because my wife is here, and she likes this song!” Sammy’s big 1962 hit and his self-described “favourite song” gets a beautiful arrangement in which he sings the first two-thirds with the sole accompaniment of John DeRosen (a classical guitarist who had studied under the virtuoso Andrés Segovia in Spain). Not even a brief interruption from the floor can ruffle Sammy (“A spy from The Stardust, eh?”), as he continues on to his signature big finish.

Drums Medley: Sammy loved to sing a drums-only medley in every performance, featuring his staff drummer Michael Silva. Here the set is played partly for laughs, with Sammy clowning around the various songs. He even includes a number he had recorded as The Cheshire Cat for a Hanna-Barbera animated version of Alice in Wonderland which had aired in March that year, “What’s A Nice Kid Like You Doing In A Place Like This”.

You’re Nobody Till Somebody Loves You: Only a minor modification is made from the Quincy Jones arrangement Sammy used when he recorded this title with Count Basie, and by the end this version swings just as hard. Sammy is having so much fun, this number presages the ultra-swing session Sammy would visit upon The Copa Room a week later with Buddy Rich in The Sounds Of ’66.