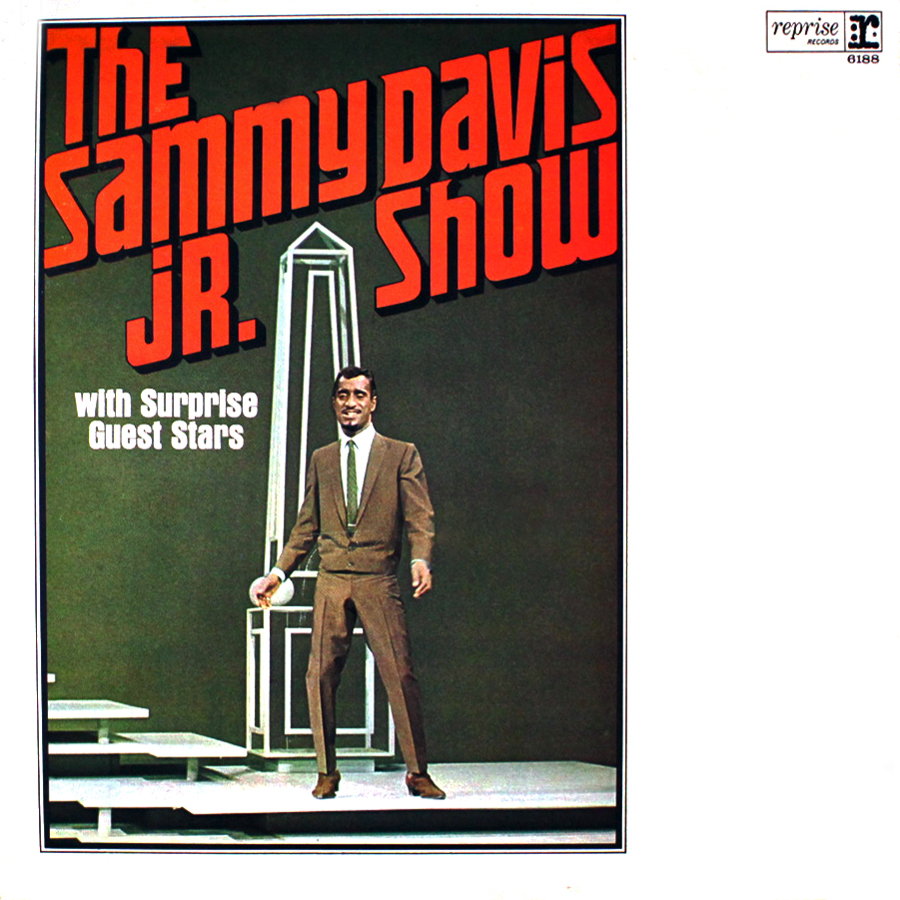 In late 1965, Sammy Davis, Jr. was ubiquitous in American popular culture: he was performing 8 shows a week on Broadway in Golden Boy, had just released the LP Sammy’s Back On Broadway for Reprise Records, had published a bestselling autobiography titled Yes I Can, and was filming a feature film titled A Man Called Adam for which he was both the producer and the star. Can he do even more? Yes he can!

On 7th January 1966, The Sammy Davis, Jr. Show premiered on NBC and Sammy became the first African American to host an hour-long weekly prime-time network variety show. The full story of the show is a somewhat bizarre and unlucky one. For more details – including how for three of its first four episodes Sammy didn’t even appear on screen (!), and how it was cancelled just as it found its feet – please see the page on this site dedicated to The Sammy Davis, Jr. Show.

This album is in no way a ‘soundtrack’ album, despite all appearances to the contrary. It contains no performances that ever appeared on the TV show. Reprise presumably wished to capitalise on Sammy’s appearance on the small screen and cobbled together an album’s worth of fairly disparate musical content Sammy had recorded during 1965. The album contains some absolute gems, but thematically it is all over the place – it features a couple of French songs, three more Broadway numbers, a pop cover, an original with a touch of country about it, as well as a TV show theme!

Reprise also included four recordings that had been previously released: two of Sammy’s biggest hits (“Hey There” and “What Kind Of Fool Am I”), and two recordings with Sammy’s Rat Pack pals Dean Martin and Frank Sinatra (billed on the album cover as ‘Surprise Guest Stars’, even though neither of them ever actually appeared on The Sammy Davis, Jr. Show). “We Open In Venice”, from Reprise’s 1963 Kiss Me, Kate Reprise Repertory Theater LP features all three buddies horsing around merrily, while “Sam’s Song” is a 1962 duet between Sammy and Dean which the two regularly incorporated into their live ‘Summit’ act.

Starting in 1963, Sammy had made several trips to Paris to perform at the Olympia Hall and during those trips befriended French singer and songwriter Charles Aznavour. The two bonded over their mutual talent, and when Aznavour was married in Las Vegas in January 1967, Sammy Davis, Jr. was his Best Man. Naturally, Sammy would see it as only fitting for him to record two pieces written by Aznavour and only recently been given English lyrics. One of them, “Paris Is At Her Best In May”, finds Sammy putting on his most stereotypical French accent and breaking out an Aznavour impression.

Nothing exemplifies the arbitrary nature of the song selection on this album more than the inclusion of Sammy’s first TV theme song “My Mother The Car” (TV themes was a genre Sammy would return to in the mid-70s). My Mother The Car was 1965 NBC show which featured Jerry Van Dyke playing Dave Crabtree, a man whose deceased mother is reincarnated as an antique car and communicates with him through the car radio.

My Mother The Car lasted 30 episodes, whereas The Sammy Davis, Jr. Show lasted only 15. If you think that’s a cosmic injustice, take a number.

More Than One Way: Written by the Rat Pack’s favourite composers, Sammy Cahn and Jimmy Van Heusen for the moderately successful 1965 musical Skyscraper, this is exactly the type of Broadway number Sammy can and does knock out of the park. Ernie Freeman’s arrangement features strong string backing and tasteful chorus vocals in support, giving freedom for Sammy to highlight the appealing melody.

Feeling Good: One of two songs included from The Roar Of The Greasepaint – The Smell Of The Crowd by Leslie Bricusse and Anthony Newley, the other being the outstanding “This Dream”. That made six titles from that score that Sammy had thus far recorded for Reprise. Today’s crowd is familiar with Michael Bublé’s barnstorming James-Bond-theme-esque take on the song (borrowing from Hal Mooney’s arrangement for Nina Simone), but Sammy’s version is a different type of cool, better suited to the context of the musical. The song is a powerful mix of wistfulness, heartbreak and triumph, which Sammy delivers on. The perfect pensive mood is created by the bongo-only intro and closing, through to the bluesy electric bass and lashings of flute.

Love, At Last You Have Found Me (J’en Déduis Que Je T’aime): While Sammy plays the clown on the other Charles Azvanour-written piece on this album, this first-rate love song is treated with the respect it deserves. Claus Ogerman provides the arrangement which builds nicely throughout.

If You Want This Love Of Mine: Arranger Claus Ogerman makes heavy use of the backing vocals and Sammy channels more than just a touch of Ray Charles, making this a rewarding deep cut. It was written by Baker Knight, a singer/songwriter whom Reprise producer Jimmy Bowen was working with to generate hits for Dean Martin (Sammy recorded “Your Other Love” – also by Knight – at the same session). In 1964, another Knight, singer Sonny Knight (real name Joseph Smith) had recorded an R&B version of “If You Want This Love Of Mine”, which charted at #71. He released it as “If You Want This Love” and incorrectly claimed songwriter credit for himself, which has caused lasting confusion.