Given everything happening in the world today, it’s both amazing and saddening how relevant many of the messages being delivered by artists such as Sammy Davis, Jr. in the 1960s still feel.

Today’s YouTube Tuesday clip comes from 2nd November 1968, when Sammy Davis, Jr. hosted an episode of The Hollywood Palace. Sammy had just returned from a European tour after finishing the West End run of Golden Boy in London. He returned to an America in turmoil.

Sammy chose to close the show with “Peace, Brother, Peace”, a song which had been recently recorded by Bill Medley (best known as one half of The Righteous Brothers) and went on to become a Top 40 hit. The song was written by the legendary songwriting team of Barry Mann and Cynthia Weil, and, 50 years on, its lyrics still hit home:

No more talking, everything we say, it has been said before
Time for feeling, reaching down into your heart, and even more
Time for changing, the man that you are
…
We gotta get together, do a little giving
Change our way of thinking, change our way of living
And Lord, Lord, we’ve got to stop the hating, and no time left for crying
When the kids are going hungry, and the good men are dying

The full episode featured Aretha Franklin (who does a soul duet with Sammy), sunshine pop group Spanky & Our Gang, child actor Johnny Whitaker, comedian Corbett Monica, and singer-guitarist John Bassett, and can be found on YouTube. Sammy also sings “MacArthur Park” and “I’ve Gotta Be Me”. 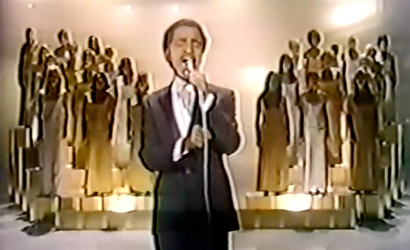