YouTube Tues: Jam Session on “The Steve Allen Show” in 1956

On this day in 1956, The Steve Allen Show debuted on NBC – and its premiere episode featured as headline guests The Will Mastin Trio starring Sammy Davis, Jr. and movie star Kim Novak. The episode partly promoted Mr. Wonderful, which was running on Broadway at the time.

Today’s clip is of a mid-show jazz jam session segment in which Sammy plays bass, trumpet and drums, along with Steve Allen playing piano, clarinet and trumpet. The segment also features short solos by two A-list jazz legends, Roy Eldridge on trumpet and Coleman Hawkins on tenor saxophone. What a privilege to see 4 legends working together, even if the clip is only a couple of minutes.

Flowing from the success Steve Allen had had hosting The Tonight Show over the previous two years, The Steve Allen Show was a Sunday night variety show designed by NBC to compete with The Ed Sullivan Show, which aired at the same time on CBS.

The full debut episode features Sammy singing “Five” and “The Birth of The Blues”, appearances by Vincent Price and Wally Cox, and cameos by Jerry Lewis and Bob Hope. This episode also has the distinction of marking the first time that Sammy and Kim Novak met each other, although their infamous romance wouldn’t begin until a later time (although accounts differ, and some say the spark was lit at this meeting). 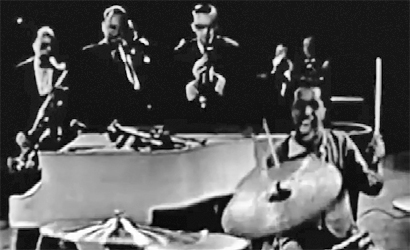