One of the more notable moments on Sammy Davis, Jr.’s road to success was his controversial appearance on The Colgate Comedy Hour on 17 February 1952. It was not Sammy’s first TV appearance – he had previously appeared on Hollywood House in 1950, and on The Ed Sullivan Show twice in 1951. But the Trio was always looking for greater exposure, and when host Eddie Cantor saw The Will Mastin Trio perform at Ciro’s and offered them a booking on his show, they grasped the opportunity.

The Colgate Comedy Hour on NBC was a variety show having great success with a rotating group of hosts, going directly up against The Ed Sullivan Show on CBS at 8pm Sundays. Cantor, a former vaudevillian, comedian, and famous radio personality, was now a big name in television, and one of the rotating hosts alongside Jerry Lewis and Dean Martin, ‘Bud’ Abbott and Lou Costello, and others.

At a particular point in Sammy’s routine (8:10), Eddie came across the stage and patted the sweat from Sammy’s brow with his handkerchief. Then, at the end of the performance (10:35), Cantor placed his arm around Sammy. The reaction was swift and vituperative; angry letters, mostly from the south, flooded the network and sponsors Colgate. They were both racist (“Eddie Cantor, Where do you get off wiping that little coon’s face with the same handkerchief you’d put on a good, clean, white American face?”), and/or anti-Semitic (“Dear lousy nigger, keep your filthy paws off Eddie Cantor. He may be a jew but at least he is white.”)

The network became nervous, Colgate even more so. But, despite a background performing in blackface, Cantor was no racist – far from it. Cantor had already booked the Trio in for a follow-up appearance on Cantor’s next show hosting, 9 March, and his response to the racist pressure placed on him was to immediately book the Trio for another show the week after on 16 March! To make his point, he mopped Sammy’s brow again on the first of these shows.

Cantor was also a big influence on Sammy’s conversion to Judaism; Sammy wore a mezuzah given to him by Cantor. Cantor visited him in hospital following his car accident in 1954, and the two remained friends until Cantor’s death in 1964.

This clip is a great look-in at Sammy’s early-1950s act. We see two rounds of Will Mastin and Sam Sr.’s moves, and plenty of Sammy’s tap routine, as well as his impressions – note no ‘straight’ singing at this point. He makes a quip about his eye falling out that seems creepily prescient…

Check out Sammy’s tap move starting at 4:09 – it’s part of the rich history of precursors to Michael Jackson’s moonwalk. 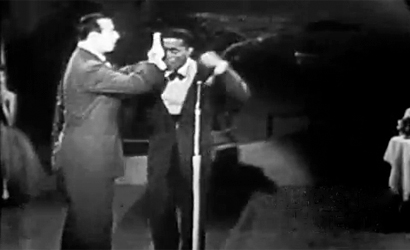