Song of the Week: “Two Ladies in de Shade of de Banana Tree”

Sammy Davis, Jr. recorded “Two Ladies in de Shade of de Banana Tree” in July 1961 with Marty Paich and his Dek-Tette. It appeared on his Broadway album with Paich, Sammy Belts The Best of Broadway. When Collector’s Choice reissued Sammy’s Reprise catalogue in 2004, they neglected to reissue this LP as most of the tracks made appearances on other albums. “Two Ladies” was left being the only cut never to make an appearance on CD. In 2009, the album was released for digital download.

This song is from the 1954 Broadway musical House of Flowers, based on the 1950 short story by Truman Capote. Producer Saint Subber convinced Capote to work on the book and lyrics with Harold Arlen, but it ended up being his only musical. It lasted for 165 performances on Broadway (image right), and had two particularly unsuccessful revivals in 1968 and 2003.

The reason for its lack of success might be be found in a review by John Kendrick from 2003: “The plot is so slight that it cannot hope to sustain audience interest for an entire evening. As two neighbouring bordellos in the West Indies battle for business, one of the prostitutes falls in love and wishes to marry. Her madam plots to keep her, and fails. That’s it folks – we’re expected to care about this for over two and a half hours? No wonder the show has flopped over and over again.”

One song from the score became a jazz standard – “A Sleepin’ Bee”. Its definitive recording was by Mel Tormé and Marty Paich on Swings Shubert Alley. So it’s not surprising that Sammy chose another tune from the show to record with Paich – despite the fact that Truman Capote wasn’t Sammy’s biggest fan (certainly later in his career, anyway). Referring to Sammy’s penchant for adopting any fad, style or genre, Capote once said “There is no Sammy Davis, Jr.” Sammy did, however, receive an invitation to Capote’s famed masked ‘Black and White Ball’ in New York in July 1966.

Bonus: Sammy’s pal Peter Lawford was hardly a singer, but he released two singles in 1957, one for Harlequin Records which had “Two Ladies in de Shade of de Banana Tree” on Side A, accompanied by Buster Davis & Group. If you dare, you can check it out on YouTube. 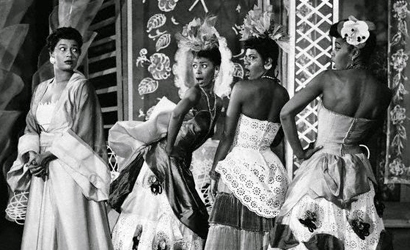