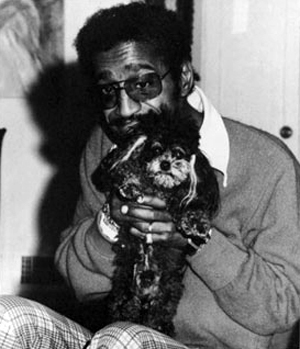 In all the reading I’ve done about Sammy Davis, Jr. over the years, I’d never heard of or seen reference to him owning dogs – other than the time Hugh Hefner gave Sammy a Saint Bernard pup named ‘Playboy’ as a thank you for appearing on his show Playboy’s Penhouse in 1960.

But here’s a pic from the mid-1970s with Sammy posing with his adorable mutt, a black poodle named – of course – ‘Bojangles’!

The image hails from the 1976 book The Growling Gourmet, by Ellen Graham. It features celebrities with their dogs and their favourite doggie recipes. Sammy’s favourite recipe for Bojangles? “Chicken with Kibble: Boil a chicken and remove all the bones. Cook with vegetables, mix with Kibble and 1 teaspoon of bacon grease for flavour and the dog’s coat.”

Not quite as exotic as Zsa Zsa Gabor’s Hungarian goulash, but probably better for Bojangles! Hopefully Bojangles fared better than the hound owned by his namesake in the Jerry Jeff Walker tune…