Song of the Week: “Lost In The Stars”

“Lost In The Stars” appears on Sammy Davis, Jr’s second LP for Reprise, Belts The Best of Broadway (and six months later it was also included on What Kind Of Fool Am I – And Other Show-Stoppers). Sammy delivers a beautiful reading of this act-closing song from the Kurt Weill and Maxwell Anderson musical of the same name – full enough of emotion for them to ignore a slight hesitation on ‘sometimes it seems maybe God’s gone away’, and not use another take. (Which is not to say they were rushing; according to Belts The Best of Broadway’s liner notes, “My Romance” took 23 takes.)

The musical was Kurt Weill and Maxwell Anderson’s adaption of Alan Paton’s 1948 novel Cry, The Beloved Country, an examination of the social forces that would soon lead to apartheid in South Africa. In March 1948, Anderson wrote to Paton in his successful efforts to secure the stage rights to the novel: “For years I’ve wanted to write something which would state the position and perhaps illuminate the tragedy of our own negroes. I think you have said as much as can be said both for your country and ours.”

Curiously, “Lost In The Stars” the song wasn’t actually written for Lost In The Stars the musical – it was written in 1939 for Ulysses Africanus, a later abandoned theatrical piece about a lost slave’s journey finding his way home during the Civil War. After Weill and Andrerson gave up on the project, the song was published in its own right in the early 1940s and was recorded by both Walter Huston and Frank Sinatra.

When Weill and Anderson’s new musical premiered in 1949, it took its title from the song “Lost In The Stars” because the film rights to Cry, the Beloved Country had already been sold, and there was some hope they could sell movie rights to the adaption specifically if there was a different title. The re-purposed song proved one of the most popular parts of the production. In 1972, noted critic Alan Rich wrote in the New York Magazine “Kurt Weill was the greatest composer of theatre songs of the century … I am moved closer to tears by the title song of Lost in the Stars than by any other single song created for the American stage.”

However, the original author Paton disapproved entirely not only of the musical’s ending, which he felt betrayed the novel’s Christian message, but also of the lyrics to “Lost In The Stars”, which he considered profoundly un-Christian and an invitation to despair – the opposite of his intent in the novel.

Out of context, at least, “Lost In The Stars” is a beautiful piece, and no-one in their right mind could disapprove of Sammy Davis, Jr.’s heartfelt and touching rendition, supported perfectly by Marty Paich’s complementary string arrangement. 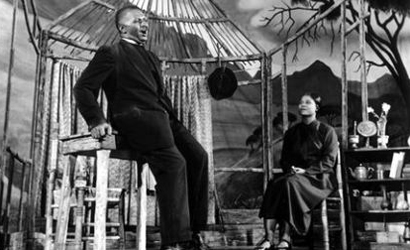