Sadly, Buddy Greco passed away on Tuesday this week. Just one year younger than Sammy Davis, Jr., the long time Vegas headliner originally started as a jazz pianist and toured with Benny Goodman in the late 1940s, before branching out on his own. He met Frank Sinatra while playing The Sands with his trio in 1955, and became a ‘Rat Pack’ associate of sorts. He told the Las Vegas Sun in 1999:

“After my show I used to go back to the Copa room and watch Nat Cole play. Beside the curtain was this huge booth that was Sinatra’s booth, with all his cronies, Dean and Sammy and Peter and Joey. Frank says, ‘Hey, Dag!’ (short for the usually-offensive-but-in-this-case affectionate ‘Dago’) and I said, ‘Hello Mr. Sinatra.’ He said, ‘First of all, my name is Frank to you. Come and sit with us.’ I was in absolute heaven.

“He came to see my shows for years and years and years. I went to his house, wrote arrangements for him. We drank. We caroused. We stayed out till 6 in the morning, played golf at 10, half ripped … I was with them when the Pack was in its full blossom.”

Frank liked Buddy because he could swing, whereas other vocalists of the day patterned themselves more as ballad singers. Greco signed for Frank’s Reprise Records in 1965, and Sammy appeared on Buddy’s TV special Something Special the same year (video to the right). Sammy and Buddy would perform together regularly during the 1970s and 1980s.

One notable occasion was in December 1988 at Bally’s Casino in Atlantic City where he joined Frank and Sammy – who were celebrating their December birthdays – on stage. The three sang “The Lady Is A Tramp” a number which all three had had success with through the years. The audio circulated on an unofficial release called Birthday At Bally’s, and the video is to the right.

Buddy continued to perform through the years, focussing on jazz, and playing the lounges in Las Vegas – the city where he died aged 90. He is survived by his fifth wife, Lezlie Anders. Rest in peace, Buddy. 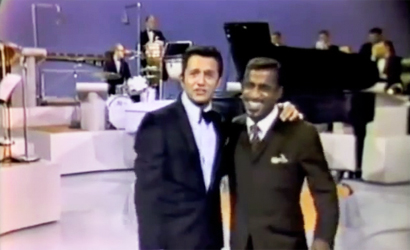